First line to open in 2012, including airport and rail links

Contract wins for CAF and Siemens

Expand
A fleet of 27 seven-module trams have been ordered from CAF in Spain.
The busy thoroughfare of Leith Walk is expected to be less dominated by motor cars as trams have started running in 2014.
Newhaven is the short-term northern limit of tram operation.
Princes Street at the heart of the city centre will be provided with a frequent-interval service to both Edinburgh Airport and the Leith business and retail area.
The most recent UK order for CAF products has been the 23 trains for Northern Ireland Railways from 2004. The Class C3K trains run in three-car formations.
Map displaying the route of the new tramway in Edinburgh. 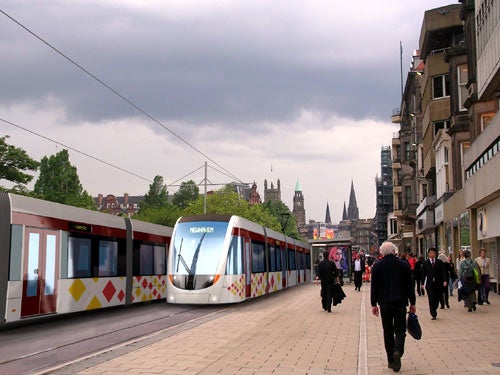 Edinburgh, Scotland’s capital city and administrative centre, opened the first section of its new tramway network on 31 May 2014. The tramway is managed by the city council’s arms-length company Transport Initiatives Edinburgh (TIE), and operated by Transdev.

The light rail scheme passed its final legal hurdles in the Scottish Parliament at the end of 2007, having been within a hair’s breadth of cancellation when political control was gained by the minority Scottish National Party, its members believing that the tramway money could be better spent on road improvement schemes across the country. However, concerns that the project would overrun on costs were not supported by an independent audit, and other political groups finally forced the project through Parliament by a narrow vote.

The primary funders were a consortium of the Scottish Executive, Edinburgh City Council and developers, including Forth Ports.

The project was originally slated for completion in 2010 but was put on hold owing to a dispute between TIE and the contractor, Bilfinger Berger.

Phase 1 of Edinburgh Tram runs 14km from Edinburgh Airport in the west to Newhaven in the heart of the Leith Docks commercial and leisure development area, running via the city centre and calling at Haymarket and Waverley national rail stations.

"Edinburgh, Scotland’s capital city and administrative centre, opened the first section of its new tramway network on 31 May 2014."

The total cost of the project (for the first two routes) was £600m, and it was hoped that this would come in under budget, allowing the savings to be used for a Phase 1b from the Haymarket to Granton, and running close to Western General Hospital.

Later phases of the tramway project included the completion of an outer circle via a short connecting line between Granton Square and Newhaven, and also a branch from Ingliston Park and Ride to Newbridge North.

As both trams and Lothian Buses are owned by the City of Edinburgh Council, fares are the same for equivalent journeys. Tram ticket vending machines and validators are located at every tram stop.

It is proposed that an initial frequency of six trams per hour will run across the first phase. This will climb to 12 an hour from St Andrew Square to the foot of Leith Walk.

Preliminary ground works started in the autumn of 2007, and in a pioneering move for the UK, advance agreement was reached with gas, water and electricity companies to move all utility pipes and cables in one contract to minimise disruption and also allow easy access in the future.

Standard gauge track (1,435mm) is used in the project, and conventional tram stop platforms and shelters with ticket machines, lighting and CCTV together installed. The network has also been designed for disabled access throughout.

The line-1 of the tramway network required the construction of bridges to cross railway lines at Edinburgh Park and Stenhouse, and a tunnel under the A8 near the Gogar roundabout. A bridge at Balgreen was also widened as part of the project. The principal rolling stock and maintenance depot is at Gogar, close to the airport, which has required extensive ground excavation to provide sound insulation in a sensitive area.

Spanish builder CAF beat Alstom to win a £40m contract to supply 27 trams under a 30-year build-and-maintain arrangement. The trams use conventional welded steel bodyshells, intended for a long life and ease of repair damage. They are 42m long, with seven modules resting on four bogies.

The French team responsible for the internal design also worked on the Nottingham Express Transit trams for Bombardier, and TIE has specified step-free access and internal movement, and large luggage areas for airport passengers. A unique feature is the ability screen off part of the tram for night services, giving on-tram staff great control for small number of passengers.

The trams were tested on the Siemens test track in Wildenrath, Germany, in March 2010 and were delivered between 2011 and 2012.

The preferred bidder for the £220m infrastructure contract was named at the end of 2007 as the Siemens/Bilfinger Berger consortium. It was also responsible for supervising the delivery of the CAF trams.

The signalling follows tramway conventions, with vehicles manually driven on ‘line of sight’ procedures, but with the benefit of computerised management on non-segregated track sections and automatic maintenance data collection.

All waiting shelters and trams are equipped with CCTV and emergency call points, with additional real-time information displays inside the trams. A public address system is also available to the driver.

CM4
CM4 has proven experience with over 30 years in the...
Jewers Doors
Jewers Doors engineers and manufactures the Phoenix range of high-quality...
SUBSCRIBED