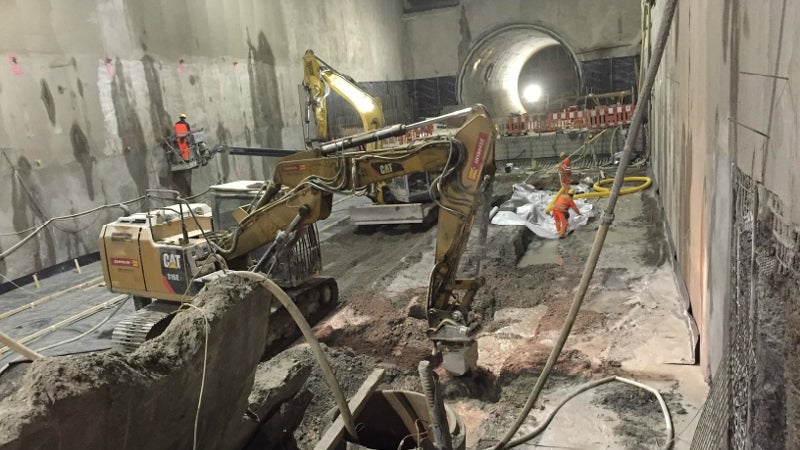 Die Kombilösung is a state-of-the-art hybrid tram-train system being developed in Karlsruhe, Germany. The massive project is set to overhaul the public transportation infrastructure in the region by increasing its capacity and upgrading the service.

The project will enable commuters from surrounding areas of Karlsruhe to travel directly into the city without changing lines. It includes a rail tunnel under Kaiserstrasse and a road tunnel under Kriegsstrasse with a tram line built over the tunnel.

Construction on the project, which commenced in January 2010, is being undertaken in phases. The rail tunnel is scheduled to be opened in December 2018, while the tram line will begin operations in December 2021. The total cost of the project was estimated to be €640.9m ($875.86m) as of September 2011.

The number of passengers using the tram-train service in Karlsruher is growing steadily. The service transported 20 million passengers in 2000, which increased to 176.6 million by 2010.

With passenger numbers increasing, the number of trams is also projected to rise to meet demand. Tram-trains currently travel at the rate of one a minute. With an increased number of trams, the waiting time at stops and signalling systems will increase, enhancing passenger services.

Furthermore, the trams pass through a busy shopping boulevard in the heart of the city. Frequent tram train services are causing interruption to pedestrians, visitors and shoppers.

The Kombilösung project will move the tram tracks below Kaiserstrasse and create a 2km-long, rail-free, pedestrian-friendly area above ground. It aims to increase the quality of life of residents, while also attracting visitors.

Driving through the city will also become easier with no above-ground rail tracks. Further, the number of trams travelling through Kaiserstrasse will be reduced by 70%.

The underground stations will be spacious and disabled-friendly and feature a number of modern amenities. They will be equipped with elevators, escalators, fire protection devices, video surveillance, and both low-floor and medium-highways. A guidance system will be installed to provide orientation.

Construction works on the project are being undertaken in phases, commencing with the excavation of the Europaplatz, Lammstrasse and Kronenplatz underground stations in two phases.

The TBM has a cutter head with a diameter of 9m and can excavate at a rate of 10m a day. The machine puts reinforced concrete for the tunnel lining, after each meter of tunnelling.

A cut-and-cover method is being used for tunnelling of the underground stations. The method involves sinking bored pile walls into the ground and placing a concrete cover over it. Excavation of the stations continues under the cover with the surface being available for traffic.

The rail tunnel tube was completed in October 2015 with more than 135,000m³ of soil excavated. Installation of station walls, inner walls and finishing works is in progress.

The southern branch of the rail tunnel is being excavated using the mining method due to its short length. The open-cut method is being used in areas of low depth as no other construction method would be suitable.

“A 70m-long tunnel boring machine (TBM) is being used to excavate the rail tunnel.”

The road tunnel will be built using open construction. Ground-breaking marking the start of construction took place in April 2017. The construction is expected to be completed by May 2021, with commissioning expected in September 2021.

A consortium of Beton und Monierbau (BEMO), Alpine Bau Deutschland (acquired by BEMO in 2013), Universal Basic and Special Construction (GSB) and FCC Construccion was awarded the contract for the tunnel construction.

Harrer Ingenieure is providing structural evaluation services for the rail tunnel construction. ZETCON is also involved in the construction of the tunnel.

KREBS + KIEFER and Zerna Baumanagement joint venture has been contracted for construction supervision.

Companies involved
Atkins
With over 1,400 professionally qualified staff in its rail business,...
SUBSCRIBED