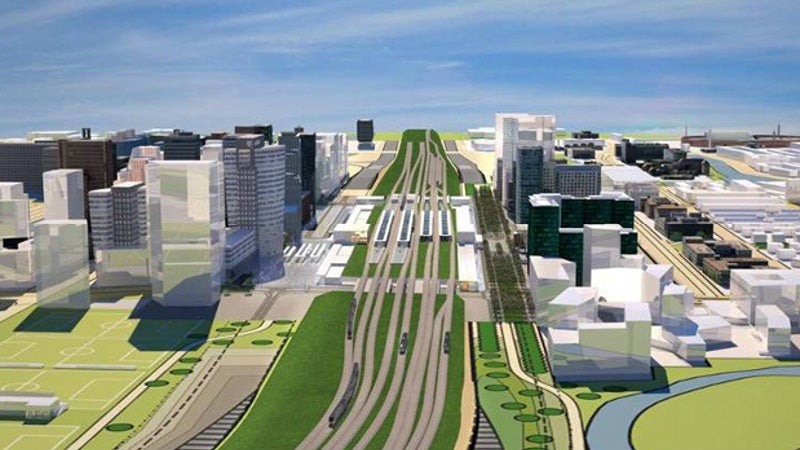 Amsterdam Zuid Station is located in the borough of Amsterdam-Zuid in Amsterdam, Netherlands. The station is being expanded and modernised as part of the Zuidasdok project, which also involves the widening and rerouting of the A10 South motorway’s underground section, and reconstruction of public transport infrastructure.

The station expansion project is aimed at improving the traffic flow at the station, while transforming the existing station into a modern transport hub. It will also stimulate new urban developments in Amsterdam-Zuid.

Construction on the project is anticipated to begin in 2019 and is scheduled for completion in 2028.

Opened in 1978, Amsterdam Zuid is the fastest growing station in the Netherlands. The number of train services and passengers at the station is forecast to increase in the coming years, while the current station is insufficient to cater to the growing traffic necessitating expansion.

Furthermore, the existing station lies between the lanes of the Southern A10 and high-rise office, leaving no space for expansion. The southern section of the A10 will, therefore, be rerouted through underground tunnels to create space to develop a high-quality and compact intermodal transport terminal.

Design and features of the new Amsterdam Zuid Station

The new station will feature a light and ethereal design that suits the surroundings of Zuidas. The platforms will be widened and covered with new roofs. The metro platforms east of Minerva Passage will be positioned centrally between the British and the Minerva passages to ensure the distribution of passenger flows across the passages. The modifications will also enable faster transfers between train, metro, tram and bus services.

The current Minerva Passage, which links the northern and southern part of Amsterdam’s Southern Axis, will be widened and a new underpass, British Passage, will be built. The project will also create additional space adjacent to the station to house new bus and tram stops, bicycle parking facilities, and lots for taxis and park & ride facilities to enable quick and comfortable transfers.

The new station will include four rail tracks with additional space reserved for two more tracks. It will have four metro tracks, including double tracks for Noord / Zuid metro line.

“The southern section of the A10 will be rerouted through underground tunnels to create space to develop a high-quality and compact intermodal transport terminal.”

The project is estimated to cost approximately €1.9bn, making it one of the biggest infrastructure projects in the Netherlands. It is being funded by the Dutch State, the City of Amsterdam, the Vervoerregio Amsterdam, and the Province of Noord-Holland, with an additional investment by the Dutch Railways (NS).

ZuidPlus, a joint venture between Fluor, Heijmans and Hochtief, was awarded a contract for the design and construction of the Zuidasdok project in March 2017. The architectural design team within the consortium includes Team V Architecture, Zwarts & Jansma Architects and Bosch Slabbers Garden & Landscape Architects.

Technolution will provide system engineering, control and monitoring systems as well as user interface for the tunnel installation.

ProRail and the municipality of Amsterdam engaged Rijkswaterstaat to manage procurement for the project.

LeighFisher
LeighFisher is a global management consultancy with expertise in transportation,...
SUBSCRIBED