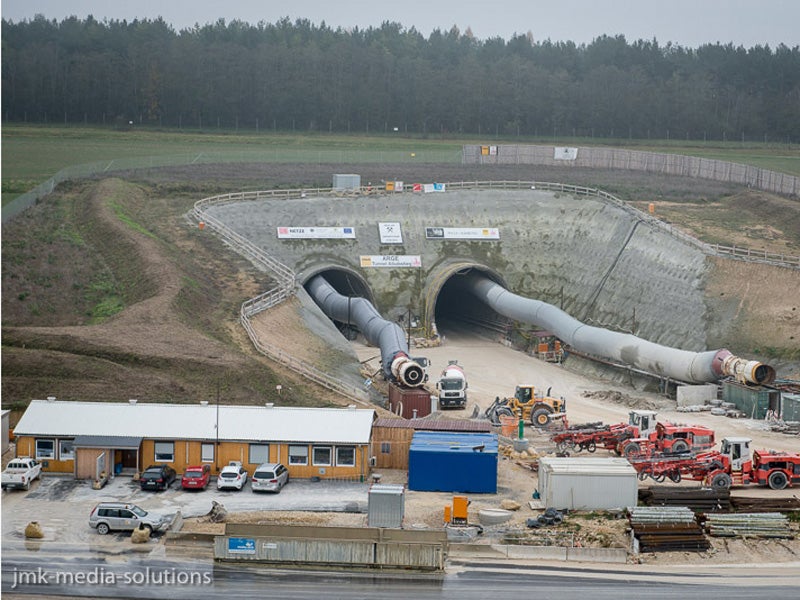 Christened as Gerlinde tunnel, the Albabstieg tunnel is a 5.9km railway tunnel under construction on the new Wendlingen-Ulm line in Germany. The tunnel will lead the Swabian Jura to the tracks at Ulm Central Station. It is expected to be completed at an estimated cost of €250m ($334m).

German railway company Deutsche Bahn is the developer of the project. The tunnel is expected to be put into operation by 2021. The Federal Railway Authority issued building permit for the tunnel replacement in July 2012.

The Albabstieg railway tunnel will have two single-track bores, lying approximately 70m below the ground, which will be connected with one another by 11 cross-passages with a gap of 500m each. It has two portals – the north portal located in Dornstadt and the south portal located in Ulm.

The elevation change of the tunnel will be roughly 95m and the tubes of the tunnel will lie 40m apart. The tunnel is designed for a speed of 250km/h and will have maximum longitudinal gradient of 2.5%. It will reach a height of 750m above sea level.

Construction on the Albabstieg tunnel began in early-2014. The official christening ceremony was held in June 2014 at the northern tunnel portal in Dornstadt. The tunnelling works on both north and south portals began simultaneously. Both the bores of the tunnel will be driven uphill to the north and downhill to the south toward Ulm.

Approximately 3.3km of tunnel was dug out by March 2015, while 5km was dug through a combination of excavators and blasting method by April 2016. Major breakthrough at the south portal in Ulm is expected to take place in April 2017.

The tunnelling works will include removing approximately 1.4 million cubic metres of soil and rock material.

Sprayed concrete technique was used during the construction. It involves loosening the rock through blasting and immediately applying the surface with sprayed concrete and reinforcement steel, followed by waterproofing with plastic membranes, and insertion of a load-bearing tunnel lining of in-situ concrete.

The equipment used for the tunnelling works includes PANTEX 3 bar Lattice Girders and shotcrete, and rock anchors. The rock areas, which are sensitive to load shifting, will be excavated using an 11m diameter full-circle tunnel heading with fast ring closure.

The difficult part of tunnel construction lies at the Jura geology section, which is located in brown Jura with low rock stability and in Oxfordian and compact limestone formations. The thickness of the rock pillar between the two tunnel tubes ranges between 5m and 30m.

The joint venture led by Ed. Züblin and its partner Max Bögl was awarded a €250m contract to build the 5.9km railway tunnel in August 2013.

"The tunnel is expected to be put into operation by 2021."

EPLASS was awarded a contract to provide project management and collaboration for the new tunnel through the workflow-based EPLASS platform in September 2013.

The consortium led by PORR was awarded a contract to build the Albabstieg tunnel on the new-build section from Stuttgart to Ulm (S21).

ILF Consulting Engineers (ILF) was awarded the contract to provide design for the Albabstieg tunnel as part of the Wendlingen-Ulm line.

iC was awarded with a contract to provide the final design for the NATM primary lining, and TBM segmental lining and intersections for Albabstieg section.