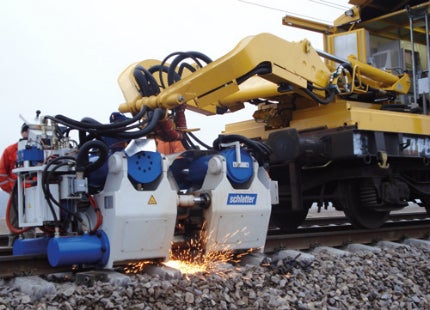 In addition to the AMS60, Schlatter developed another mobile rail welder, the AMS100. It is simpler in design, but sturdy and it provides more force than the AMS60. Consequently its main purpose is welding of bigger rail cross sections that are used for higher axle loads at relatively slow running speeds.

System AMS100
A few years ago Schlatter developed the AMS100. Its special feature is a separate hydraulic lifting device that pushes the rail head to vertical stops for exact vertical alignment of the running surface. Thanks to a parallel guiding system of the two machine halves it aligns the two rail ends exactly in the middle axis of the rails.

The AMS100 features a lot more welding force than the AMS60 and thus it allows welding of heavy rail profiles and even grooved rails. It is often used for welding of freight train track where heavy rails are used. Nevertheless the AMS100 has also welded in high-speed lines in various projects and passed the respective homologation processes successfully.

The Schlatter Group is a world leader in plant manufacturing, providing resistance welding systems for...

The AMS200 is the latest development in mobile rail welding machines, a new generation that...

Solutions for rail welding from Schlatter

The Schlatter Group is an internationally leading manufacturer of stationary rail welding machines for rails...