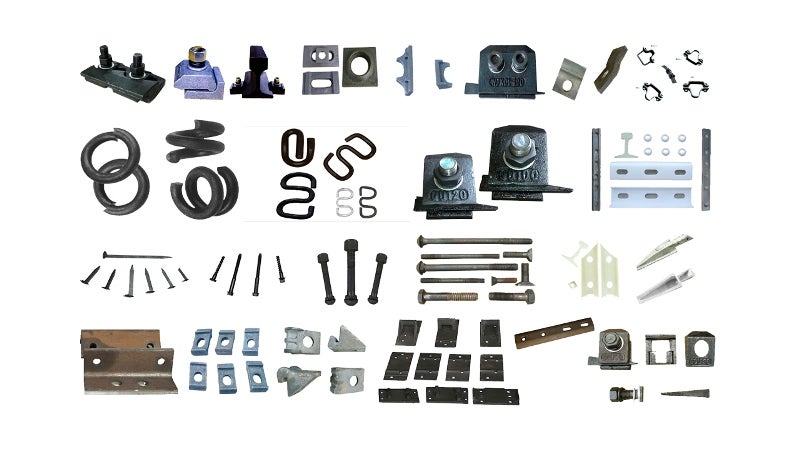 Tie plates: Also called a baseplate or sole plate, a tie plate is a steel plate used on rail tracks between a flanged T-rail and the crossties. The tie plate increases bearing area and holds the rail to correct gauge.

Fish plates: Splice bars or joint bars are metal bars that are bolted to the ends of two rails to join them together in a track.

Clips: Clips are used to fasten the rails to the underlying baseplate.

Screw spikes: A screw spike, rail screw or lag bolt is a large (roughly 6in or 152mm in length, slightly under 1in or 25mm in diameter) metal screw used to fix a tie plate or to directly fasten a rail.

Rail anchors: Rail anchors, or anticreepers, are spring steel clips that attach to the underside of the rail baseplate and bear against the sides of the sleepers to prevent longitudinal movement of the rail, either from changes in temperature or through vibration.

There are various shapes of the anchor which is made of rolled bars of various sections. When driven in the rail, the railway anchor grips the rail firmly and, when set against sleepers, resists longitudinal movement of the rails caused by passing trains.

The quality parameters of our rail anchor are as per with the International Standards and all are readily available in a considerable quantity at all times.

Bolts and nuts: Rail bolts have also been used for fixing rails or chairs to sleepers. For fastening flat-bottomed rails, an upper-lipped washer can be used to grip the edge of the rail.

They are more resistant to loosening by vibrations and movement of the rail. They are thought more effective than spikes and screws and so are used in positions such as switch (point) tie-plates and on sharp curves.