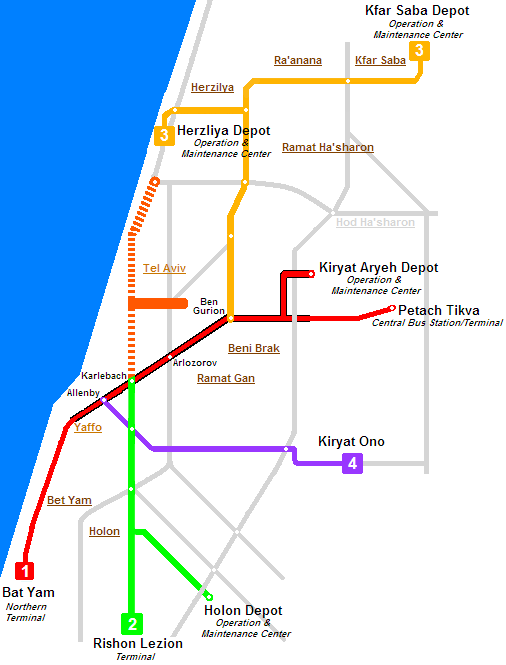 Israel’s Metropolitan Mass Transit System will soon float a tender for digging tunnels for the two lines of the Tel Aviv light railway which included the Red Line and Green Line.

The project will involve digging two parallel 11km tunnels for the Red Line at a depth of 20 metres, while the Green Line will have two parallel tunnels spanning 4.6km.

"Regrettably, realisation of the Tel Aviv mass transit project has been delayed for a long time, and the government decision, which I led to get the Red Line off the ground as part of the state budget, was an important step in getting Israel’s largest project underway," Katz added.

About 12km of the route will be underground, with the rest built to light rail standards.

At the eastern end, the Red Line will split into two branches, with one from Aharonowitz connecting to Petach Tikvah, and the other heading to Em HaMoshavot and the maintenance facility at Kiryat Arye.

The first phase of the 18km Green Line will start in the southwest of the city at Rishon Le Zion and run north to Holon and central Tel Aviv, where the final section passes underneath the city. The Red Line is scheduled to be completed and opened by 2017, with the Green Line following in 2020.

Tel Aviv’s light rail transit system is projected to cost $2.5bn and will be the largest and most expensive private transportation project in Israel to date.

The project issued more than 20 international tenders but it collapsed in 2010, following which the project was nationalised to guarantee funding.

Scheduled to be completed by 2017, the subway system on the light rail will make Tel Aviv the fifth city in the Middle East to have such a system.

Image: Tel Aviv light rail will include the Red Line and the Green Line, expected to be completed by 2017 and 2020, respectively.

The Maritime and Border Security Market in Israel to 2024: Market Brief

The Maritime and Border Security Market in Israel to 2025: Market Brief

The C4ISR Market in Israel to 2024: Market Brief

The Soldier Modernization Market in Israel to 2025: Market Brief

Future of the Israeli Defense Industry - Market Attractiveness, Competitive Landscape and Forecasts to 2023