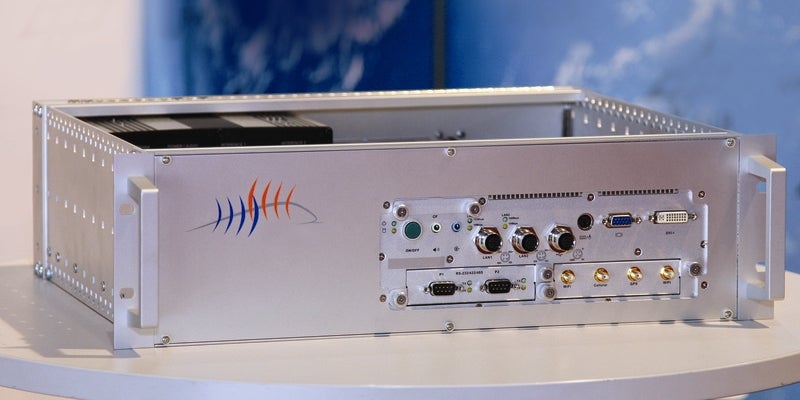 IoW’s primary product series is a train collision avoidance system solely relying on on-board components, so it is independent of the railway infrastructure.

The 19in version of the on-board unit is permanently fixed in a 19in train rack installation, which is available in most modern rail vehicles. It contains processing, communication, localisation and power modules.

A portable on-board unit may be installed temporarily to protect guest vehicles such as locomotives or even single wagons.

IoW’s collision avoidance system is designed as a so-called ‘safety overlay system’, meaning that existing railway safety systems along the track or installed in the vehicles can still be used.

IoW’s systems can be permanently or temporarily installed on any rail vehicle, including construction and maintenance vehicles. The solution is a cost-efficient addition to selectively strenghten other safety systems.

IoW’s system relies on the train’s on-board technology and does not require additional equipment in the rail infrastructure, so installation is possible without additional changes or costs.

A combination of direct train-to-train communication system, an accurate localisation system and a cooperative situation analysis and decision support system IoW’s system relies on on-board technology and does not require additional equipment in the rail infrastructure.

Rail vehicles that are not permanently equipped with the train collision avoidance system can be fitted with a portable train unit to integrate these vehicles into the safety system.

Vehicles are incorporated into the hazard analysis, so temporary and permanently equipped vehicles get collision warnings in dangerous situations, as well as appear as obstacles for other equipped trains.

To improve safety in railway construction and maintaining, a version of IoW’s product can be used to protect track workers from being hit by approaching trains through a personal device such as a mobile phone.

IoW’s train collision avoidance system has received several industry awards, including the European Rail Award for Excellence in Safety and Security in November 2013.