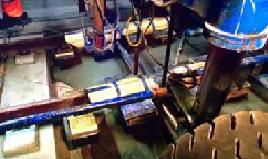 On Thursday 23 October, 2014, Vigier Rail AG produced the last of 380,000 low vibration track (LVT) supports for the Gotthard Base Tunnel.

The commonly known ‘golden sleeper’ was indeed golden. On the occasion of the actual golden sleeper installation in the Gotthard Base tunnel, an official ceremony was held on 31 October in Erstfeld.

Sonneville is very proud to be part of this project of the century.

The new Gilon Tunnel will be equipped with a low vibration track (LVT) system. The...