Vigier Rail Invest for the Future in Abetong Expertise 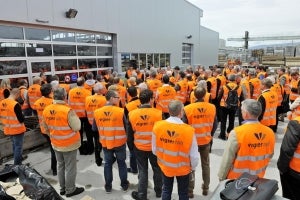 In 2014, the Swiss Railway Authority SBB and the private railway holders in Switzerland increased their sleeper demands for turnouts to quantities above the existing capacities of Vigier Rail. To meet the new requirements, Vigier Rail decided to extend its existing facilities in Müntschemier.

Except for increasing its turnout sleeper capacity by 100%, a completely new production line was established to produce the company’s so-called Flatsleepers. The new line required a possibility to be easily converted in order to manufacture different types of sleepers, where various sleeper length, track gauge and geometry were considered.

Installation and commissioning were made during mid-2014 to allow for a full scale production before the summer. With the new capacity in place Vigier Rail will continue to be well positioned for the future.

In Switzerland, Abetong and Vigier Rail signed a licence agreement in 1992. As part of the agreement, Abetong supported Vigier Rail to establish production facilities for both main line and turnout sleepers in the small village, Müntschemier, located about 30min outside of Bern.

Ever since the companies have closely collaborated in order to meet the quality and quantity demands of SBB, the Swiss Railway Authority. In 2012, the companies agreed to a continuation of license relation for another ten years.