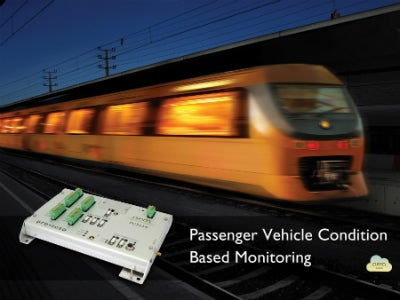 A high proportion of US train sets are more than 28 years old. Finding faults can, at best, be a hit-and-miss affair where No Fault Found is too often the frustrating answer when tracking down problems in anything from traction control to air conditioning. Even when a fleet is fitted with data recorders to monitor certain signals, obtaining the data can be challenging and rarely does it suit the context of the failure being investigated.

As a result, the information is used to manage repairs and train condition on an ad hoc basis. It is not uncommon for operators to be unable to reproduce ongoing traction control problems in a static environment, with more than 60% of all traction faults reported as No Fault Found.

OEM Technology solutions has put an end to these time-consuming, expensive and, often, dangerous problems with a machine-to-machine cloud-based network operating platform that can be retrofitted to any vintage train set. Like all good ideas, the concept is simplicity itself – a simplicity that belies the 23 years of development work behind its state of the art component parts.

In a nutshell, a network of OEM monitors data constantly via an OEM data logger to the cloud. The system reports automatically via a web-based interface and provides a two-way information flow that allows remote control of operating parameters. Data is sent continuously from the data logger that directly interfaces to analogue and digital inputs and onboard train communications networks.

This data from I/O and events is transmitted using either 3G cellular or other internet connections such as Ethernet or Wi-Fi. The device cloud stores the information as data points and data streams – data points being individual values stored at specific times and data streams the containers of data points. The data streams service is a RESTful API for storing and accessing the time series data in the cloud.

By provisioning this API, the client can not only query the time series but configure it to automatically send alerts to key personnel via SMS or email. The OEM Cloud’s web based user interface has a dashboard that displays automatically when an operator logs into their account, showing device health and status at-a-glance.

Within the data streams page of the OEM Cloud, operators can view a list of all your data streams. They can select a data stream from the list and view a chart of that data stream’s data points based on several options and using several pre-defined time periods, or simply view the raw data associated with a data stream. These streams could be showing anything from braking efficiency to temperature variations in the HVAC or the opening and closing times of an individual door.