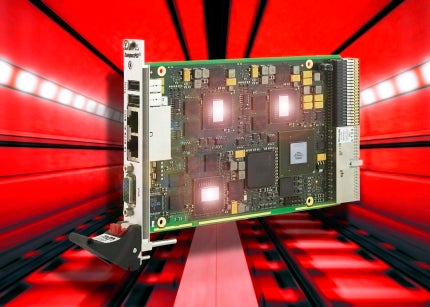 The safe F75P single-board computer unites the benefits of a 1oo2 multiprocessing system and the ruggedness and flexibility of the CompactPCI PlusIO standard on one single card.

Two of the total three Intel Atom E680T processors with 1.6GHz and 512 MB DDR2 RAM are set up to be redundant, forming the safe control unit of F75P. The third Intel Atom with 1GB DDR2 controls I/O. It passes on the commands to the interfaces that were sent by the two control CPUs across an FPGA-based communication interface.

Two supervisor units monitor the environmental conditions specified for the two control CPUs and put the system into a safe state, for instance if the maximum operating temperature was exceeded. The output of a faulty processor is not passed through (fail-silent), or the complete system is shut down in case of an error and a train, for example, is stopped (fail-safe).

To increase the availability of a system, you can also connect two F75P SBCs to form a cluster. If one card fails, the second can take over from hot or cold stand-by, and operation can continue. An event logger allows tracing and simply reading out any hardware and application events.

Basically every F75P based system can be certified up to SIL 4 – a correspondent certificate by TÜV Süd is currently in preparation. It comes together with a complete certification package including the "safety case" document for the F75P, which makes the certification process of the final system much more easier.

Characteristics typical of MEN such as the extended temperature range of -40 to +85°C, EN 50155 conformity, conformal coating and assembly of M12 connectors make the F75P a safe and at the same time robust solution – especially in rail applications where space is at a premium.