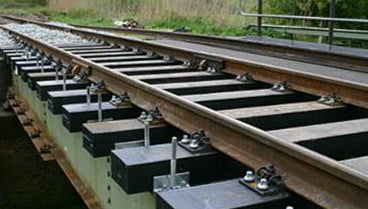 Having been developed for more than one hundred years, the railway ties need to meet the different requirements of the various railway tracks. In the past time, railroad ties were usually made of wood and had continued for about 50 years.

Then with the development of steel tracks, steel sleepers appeared. And later, the first concrete sleeper experiment was made in Germany in 1906 between the line Nuremberg and Bamberg.

In the recent time, concrete sleepers are widely used, especially in Europe and Asia. And in UK, steel ties are common. Besides, plastic composite ties are also employed in the rail track transportation.

Historically, wooden ties were made of a variety of softwood and some popular hardwoods such as oak, jarrah, and karri. They are only suitable for low-speed lines with a speed limit of 160 km/h. As to acceptable species of wood for sleepers, the types are European oak, beech, pine etc. But nowadays, wooden sleepers are mostly replaced by concrete sleepers in some countries.

In recent times, steel sleepers mostly handle heavy loads and can be designed to suit different rail track specifications. Weighing the same as timber, steel sleeper can replace wood sleepers and be used on a ballasted bridge, providing a more durable and stronger solution without increasing bridge load.

Compared with wooden sleepers, which are increasingly difficult and expensive to source in sufficient quantities and quality, concrete ties are cheaper and easier to obtain.

In some countries, concrete sleepers occupy an important position. For example, on the highest line categories in the UK, pre-stressed concrete ties are the only ones permitted by Network Rail standards.