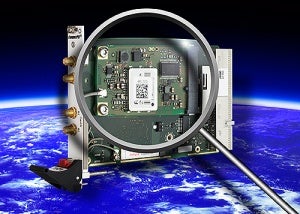 The new PX1 PCI Express Mini Card supports both GLONASS and GPS transmission and in combination with the adequate carrier card it makes a boundless usage of wireless functions possible. The PX1 is the perfect companion for uninterrupted, satellite-based data transmission in trains, buses, ships or airplanes, where requirements are ever-growing.

The PX1 is equipped with a GNSS receiver (Global Navigation Satellite System), which supports the globally accessible satellite systems GPS and GLONASS (Russia). Communication via the European counterpart Galileo, which is supposed to be launched in 2014, and via the Chinese Compass system, which will be made globally available in the future, can also be implemented on the PX1.

Being equipped with a gyroscope sensor, the PX1 even offers dead reckoning functionality. This is how the exact position of a vehicle can be identified even if the satellite signal is interrupted, for example while driving through a tunnel.

Satellite Based Augmentation Systems (SBAS) are also supported, providing even more reliability for positioning. By correction data being transmitted by geostationary satellites, positioning accuracy of the global satellite systems is multiplied many times over.

The usage of a U.FL connector allows controlling both active and passive antennas whose signals are transmitted via USB.

Just combine the PX1 with one of the many PCI Express Mini Card carrier cards or with one of the rugged box and panel PCs from the MEN product range and you get a flexible solution for demanding wireless applications.