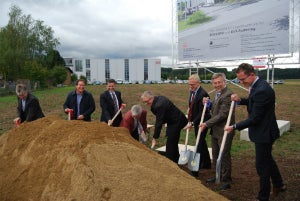 The Swiss Bossard Group is expanding its warehousing capacities at its German location in Illerrieden.

With an investment of €14 million, a modern warehouse will be erected there by the beginning of 2017, which, with a floor area of 6,100m², will offer four times as much storage capacity as at present. For the Bossard Group and its subsidiary company KVT-Fastening this expanded operational facility will function as the logistics hub for all products delivered within Germany and the CEE region.

"We have several reasons for having deliberately selected Illerrieden as the location for our new high-performance warehouse. One important factor was its central position right in the middle of Europe. We can reach all export destinations in the EU relevant for our group of companies from Illerrieden. Both domestic and international Bossard and KVT-Fastening customers will benefit from this arrangement. As the distances are shorter, product deliveries will be commensurately faster", explains Frank Hilgers, CEO of KVT-Fastening and member of the Bossard Group board of management. The new construction will be accompanied by an increase in staff, who currently number 130. Building commenced on 23 September.

Illerrieden’s town council voted for the expansion plans at the end of June. Initially the logistics facility will be manually operated, but it will be equipped to allow future automation in such a way that when goods turnover increases it can be converted at any time. "We are very pleased at the positive development of our location and look forward to the expansion and the associated prospects for the future with great excitement", says Günther Müller, CEO of KVT-Fastening Deutschland.