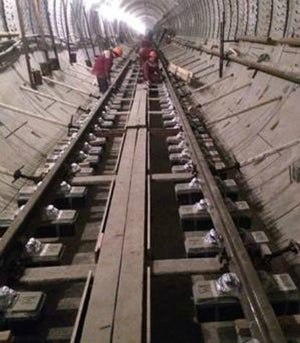 In December 2014 the new 2.2km-long Moscow Metro line from Yugo-Zapadnaya to Troparyovo was put into operation. Moscow Metro decided to use trapezoidal LVT supports for this project, as they could already gather experience with this kind of support in other projects. The newest extension also includes two 1/9 turnouts and a 2/9 type scissor crossing, which were installed with standard type LVT S&C supports.

Besides this project a total of over 54,000 trapezoidal LVT supports have already been delivered to various projects within the Moscow Metro network. LVT is not only used in new installation projects, but also as a refurbishment of existing slab tracks. The previously installed slab track system in the Moscow Metro network uses wooden blocks encased in concrete. Standard track maintenance requires the operator to replace the blocks from time to time after they reached their lifetime. For this, Moscow Metro searched a system that can be installed quickly, requires almost no maintenance, but allows an easy and quick exchange of each component. LVT was chosen as it offered a special support designed exactly for this purpose, and Sonneville AG already had experience with it in other projects. Additionally an effective vibration and noise mitigation, as provided by every LVT support, was brought into the network.

For the refurbishment the wooden blocks (single or multiple blocks) are taken out of the concrete slab during night shifts and are replaced with the special LVT supports. After the alignment has been set, the supports are grouted into the existing cavities from the former wooden blocks. This exchange work can be executed even in short service breaks of only a few hours.