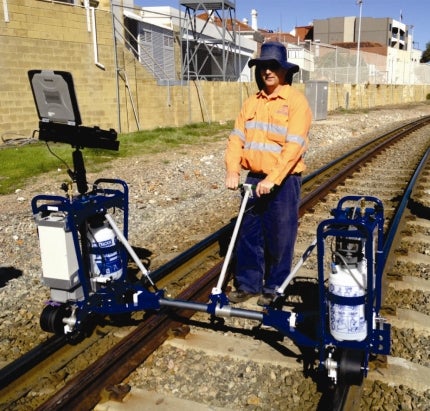 After an exhaustive selection process, Transport for London (TfL), which includes London Underground (LUL) and Tubelines, has contracted C.A.T.E.R for supply of the HANDWave SRT (Single Rail) and DRT (Dual Rail) ultrasonic testing unit. The successful bid identified ease of use and accurate information analysis as critical determining factors in TfL’s decision.

The HANDWave system met or exceeded the tender requirements for portable ultrasonic testing based on the relevant British Standards. HANDWave offered superior rail flaw detection performance, flexible setup options and an extensive range of reporting capabilities. The stringent specifications ensured the delivery of a quality unit that had clear technical and commercial advantages, in particular labour related savings through efficent testing.

The HANDWave Rail Flaw Detection system is manufactured by C.A.T.E.R. (Centre for Advanced Transport Engineering and Research) in Western Australia and is a multi-featured design with existing customers in Australia, United States, Brazil, Hong Kong, Taiwan and China. The system is SERCO approved, EMC certified and CE accredited.

FrazerNash NDT’s Business Development Director, Terry Clarke, said, "I am excited about the introduction of the HANDWave into the UK and especially for its use in the London rail environment. I am very pleased that TfL have made this far reaching and important decision which will improve the ability for rail to be more fully inspected and the results more closely analysed." He went on to say he was a strong advocate for its European and global use as the HANDWave system clearly offers greater productivity by clever application of world’s best practice technology.

A unique feature of the HANDWave design, welcomed by TfL, is that the Single Rail Tester can operate equally well as a Dual Rail Tester for pedestrian operation. In addition, in DRT (Dual Rail) form, it can be towed for more automated testing. This flexibility of design, by using various forms of the same unit, reduces the initial purchase costs, as well as ongoing maintenance costs compared to having different machines for specific purposes. In addtion, the modularity of the design allows ease of equipment access via regular walkways and escalators which ensures a longer testing time for operators.

HANDWave Series II was revealed at InnoTRANS 2012 to a rail industry which is looking to control their testing regimes more closely. The Series II is a refinement of earlier designs exhibited to great interest from the rail inspection market in the United States, Australia and Brazil. Changes and additional features, developed from extensive field experience in RFD testing, identified the need for customers to have information that leads to flaw trending and ultimately to a more predictive maintenance methodology.Trials with other UK networks are currently underway as the acceptance of C.A.T.E.R’s suite of rail inspection systems is increasingly recognised as the benchmark in accurate rail inspection.