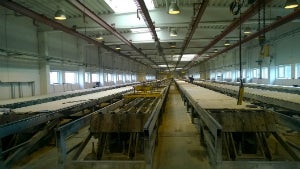 Abetong was recently awarded by Banedanmark the contract to modify and update their current Danish sleeper production plant to fit the new sleeper specification. The modifications of the sleeper plant in Fredericia will be performed during the fourth quarter in 2015.

The work connecting Germany to Denmark via a tunnel in Fehrman Belt has already started. The new high-speed link will heavily cut the travel time between the two countries. The first section, a 60km long double track, is between Copenhagen and Ringsted which means a demand of new concrete sleepers in 2016. The line will also connect Sweden to Germany using the Øresund Bridge.

The analysis performed by Abetong stated that the current sleeper was not capable of meeting the requirements in the new high-speed line. A new sleeper was designed and the factory building, including equipment, will be adjusted to enable production of this modified sleeper.