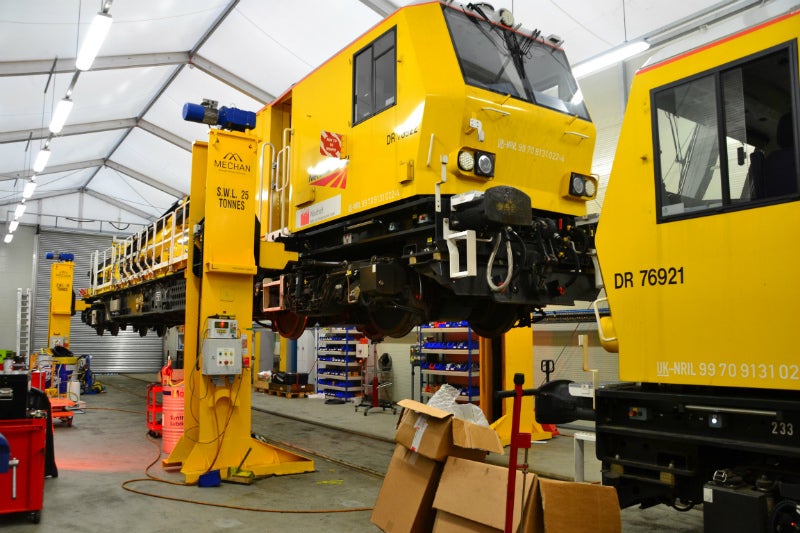 Lifting jacks produced by Sheffield-based Mechan are helping to keep the government’s plans to electrify the Great Western Line on track.

Eight 25t jacks have been installed at a new £7 million facility near Swindon, built to service a unique train carrying out the Intercity Express Programme (IEP) upgrades.

The rail maintenance specialist supplied its flagship equipment to Network Rail’s High Output Operational Base (HOOB) at the request of main contractor, Amey Rail. The behind the scenes depot houses and maintains the 23-vehicle High Output Plant System, which is being used to install overhead electric cabling along the mainline route.

The jacks are fitted with Mechan’s patented Megalink control system, enabling the entire chain to be operated by just one person from a remote, full colour touch screen that displays useful data about the lift.

Adam Elliott, Mechan’s sales engineer, said: "The HOOB order was supplied as two sets of four jacks, offering Network Rail the flexibility to use them separately or as one larger chain. This is the first project we have worked on with Amey Rail, but thanks to our ongoing servicing contract, we have established an excellent relationship and we’re confident it will lead to future collaborations."

Mechan has so far supplied five sites connected with the IEP, a major Department of Transport initiative to introduce high speed trains on the Great Western and East Coast mainlines. In addition to the HOOB jacks, equipment has been delivered to the North Pole and Stoke Gifford depots, plus Hitachi Rail’s manufacturing plant in County Durham. A number of items are currently in production for a new maintenance facility in Doncaster.