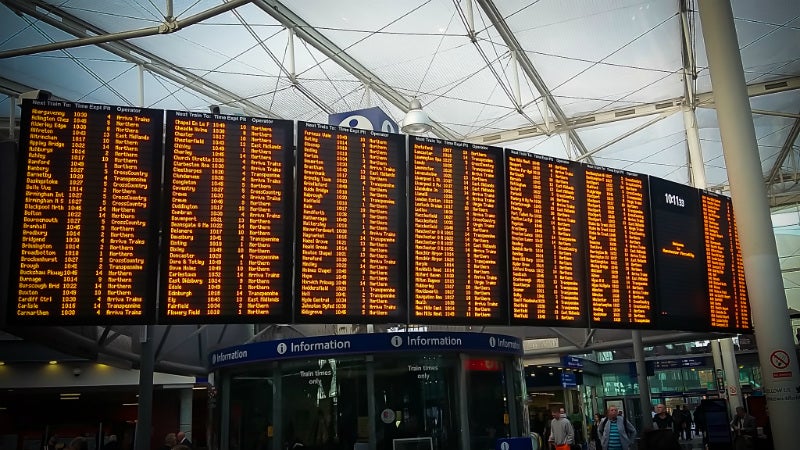 Following a successful factory acceptance test, the first new passenger information displays designed and manufactured by Infotec for Manchester Piccadilly station have been installed and commissioned.

A package of displays has been created that will provide customers with a range of information and which also offer options for future developments.

A main board, displays for the Satellite Lounge and platform entrance clocks are all included in the work, awarded to Infotec by Linbrooke Services.

The current mainboard consists of two faces with 192 A-to-Z format destinations on each face. The replacement still has A-to-Z with the same number of destinations but adds two further panels for displaying special notices and a standard departures summary.

Yellow LED has been selected for the majority of the content but the ‘expected’ column uses white LEDs, helping it to stand out by contrast. A further enhancement is that the addition of a third side to the display, making it visible from all station approaches.

The design has been made future-proof with platform indicators that are three rather than two digits to accommodate possible requirements for platform zoning and bus service options.

To ensure Network Rail and train operating companies were happy with the design, Infotec produced a life-size photograph which was hung at the station for review. This was left in place for a number of weeks to enable the public to get a feel for the new design and ensure it met expectations.

The two new displays for the Satellite Lounge replicate the existing content for each platform, but present it in a single P1204 display rather than the three separate modules currently used. White LEDs have been included to separate the clock display from the real-time travel information.

Clocks that currently sit on the bulkheads above platform entrances are being replaced and re-positioned. The new P2028 displays, which match the displays on the station’s platforms, will be suspended directly above the entrances. This will improve access for maintenance purposes, minimising future disruption.

Commenting on the new displays, Tim Court, Infotec’s managing director, said: "The new displays have been designed to improve the flow of passengers and allowed enhanced information provision, which assist in station management and passenger satisfaction.

"The current mainboard was provided by Infotec back in 2002 and it is expected that with Infotec’s latest technology on-board the displays will prove themselves to be equally reliable."

The new displays are already being installed and completion is expected before the end of October.