One of the major upcoming challenges for train operators is to provide their passengers with the fast, reliable online connectivity they are used to in their day-to-day lives.

While some inter-city routes offer wireless today, the service is often patchy or has a frustratingly weak signal that falters under high-demand at peak times.

To counteract this problem, operators have jumped on the on-board entertainment bandwagon, offering their passengers a limited selection of new TV and film releases, free to access on their own devices. This helps reduce the number of people trying to browse the internet, access social media or stream their own content.

Comment
China Invests in a New Age of Rail 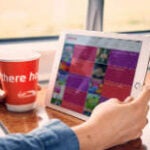 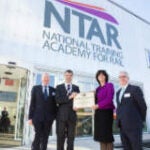 Comment
One year on: catching up with the UK’s National Training Academy for Rail
Data Insights
View All

Since its debut a year and a half ago, infotainment provider GoMedia has already partnered with Virgin Trains to launch popular on-board app BEAM, and has also worked with wireless connectivity provider Nomad Digital to deliver an entertainment package featuring films, TV shows, box sets, cartoons, games, digital newspapers and magazines on Eurostar’s new e320 trains.

GoMedia’s managing director Roger Matthews talks about meeting passengers’ demand for on-board connectivity and future plans to bring information, catering and entertainment all under one swipe of the screen.

Eva Grey: What has GoMedia achieved since its launch?

Roger Matthews: GoMedia launched about 18 months ago. Since then, we have developed our proposition, we’ve had our processes signed off by all the major US studios, we’ve signed deals with Eurostar, Virgin West Coast and Virgin East Coast and we have a number of other train and catering operators who we will be launching with soon.

The problem that we identified and wanted to solve was that thousands of people get on a train trying to get connected, which is really difficult.

Train operators are also being encouraged to provide WiFi on-board. Some of them find that when they do that, it actually reduces customer satisfaction, because customers see the WiFi signal on their device and expect to use the internet like the do at home.

But actually, there are only four to six SIM cards for each carriage and that’s shared between 90 people. So the connectivity you’re going to get on your mobile using the train WiFi isn’t very good. It also costs train operators a lot of money to create the bandwidth for their consumers.

So what we’re trying to do is take the best of the content that’s on the internet and bring it on trains. This also reduces the amount of people who want to browse the internet on their devices.

EG: How would you describe passengers’ expectations when travelling by train?

RM: The passenger’s expectation is just a consumer expectation, thinking “we should be connected”.

Whatever we do online in our normal lives, at home or in the office, we should be able to do on a train. Unfortunately that isn’t necessarily what is being delivered yet. At the moment, passenger expectations aren’t that high for the entertainment that they are going to get [on the train], because that’s not what they’ve experienced previously.

But I think – and our clients Virgin and Eurostar agreed – when passengers get on-board now and connect to WiFi and start looking through the content that’s available, they are delighted by the service. I think it does meet that expectation of having content on-board.

We only have a selection of movies, but I think customers understand that if you need to hold the content on the train, there is a limit and they can’t choose absolutely anything in the world, but they can choose from a really good selection of movies and box sets.

EG: How does the technology behind the on-board entertainment system work?

RM: We work with a number of technology providers who put the harbour on the train, the access points, cables, the servers and the computers that essentially sit on-board.

What we do is build a virtual machine on the servers which are on-board. We then download the content to both servers, and customers simply use their own handsets to access that local content on board the train, and not have to use the external link.

EG: Why do you think encouraging passengers to use their own devices was an important factor?

RM: That’s one of the reasons why this has worked and why we identified it as a potential business: there were a few things that were coming together.

In the UK, 80% of the adult population has a smart device and most people are used to using WiFi.

At the same time, in the content and pay-tv industry, platforms such as Netflix, Sky Go and NOW TV are becoming more and more popular and there’s more demand for that. So these two industries were coming together and creating the market that we could go into.

EG: What challenges have you encountered when delivering the on-board entertainment systems?

RM: One of the key challenges was actually making sure that we got access to the best content available. If you put rubbish content on the best entertainment service on the train, people won’t use it.

So we spent a long time and a lot of effort on actually working on the process within the business, and then going around and meeting the studios and the content providers, filling in security questionnaires.

The studios actually insist on coming and seeing the facilities to make sure that what you’ve told them is true. If you think about the content that people are giving us, they want to make sure that cannot be stolen, or copied by someone and then passed around their friends. So persuading people that it’s a new industry, explaining this to them, actually getting them to buy into that was one of the big barriers that we’ve overcome, which is great.

Actually, one of the technical challenges we had was putting subtitles on the servers.  Although it sounds very simple – they do it on TV, why can’t they do it on a train? – but it’s a completely different development in order to make sure that happens.

EG: So GoMedia is looking into expanding into on-board catering services?

RM: On Virgin and Eurostar, we have menus within the server so you can see what’s actually available, but that needs to be more interactive.

We’ve had conversations with a number of operators and doing some development on seat ordering. So the concept is, as I’m sat in my seat, movie is coming on, I get a pop-up message saying ’you want a beer with that?’

Those parts are reasonably easy for us to do, but then we also need to integrate with the systems that go to the food and drinks department.

There are some other logistical challenges around whether, if I order at my seat, does it get brought to me, or do I actually go get it myself? But the aspiration is certainly to layer on more and more services.

Certainly the service will become richer from an interactive perspective and from a passenger information perspective, and we will become more proactive in the way we communicate with passengers. Those are some of the things we’re working on.