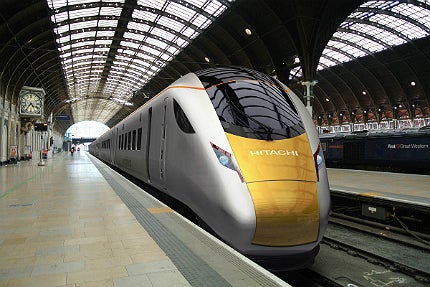 Super Express trains are being manufactured by Hitachi Rail Europe to replace the high speed trains of UK railway network under the Intercity Express Programme (IEP).

The trains will run on the Great Western and East Coast main lines of the UK. Running at a speed of 125mph (200kmph), the trains will reduce the journey time between London, Leeds, Newcastle and Edinburgh by up to 18 minutes.

The trains for the Great Western and East Coast main lines will be introduced by December 2017 and 2018 respectively. The first unit is expected to be delivered by the end of 2014.

Testing of the units will be completed by March 2015. The entire deliveries will be made by the end of 2020.

The trains will be maintained by the depots in Doncaster, Bristol, Swansea and London.

“Testing of the units will be completed by March 2015. The entire deliveries will be made by the end of 2020.”

The £5.8bn ($9.37bn) IEP programme was initiated in 2005 by the UK Department for Transport (DfT). The programme will replace the UK rail network’s intercity and high speed trains introduced in the 1990s.

A fleet of 125 intercity trains running on the East Coast and Great Western Main Lines will also be upgraded under the programme.

The DfT selected Network Rail to provide infrastructure services and Agility Trains to provide new passenger trains for the programme. Agility Trains is a consortium of Hitachi Rail Europe (70%) and John Laing Investments (30%).

Hitachi Rail Europe will provide two variants of the Super Express trains, namely Class 800 and Class 801. The Class 800 are Bi-mode (diesel-electric) trains ,whereas the Class 801 are electric trains.

Each Super Express train will have five to 12 cars. The train will be 26m long and 2.7m wide. A ten-car train can accommodate about 700 seated-passengers.

The trains will be eco-friendly, saving 12% energy and carbon per person per journey, compared to other electric rolling stock.

The train can be operated in Driver Only Operation (DOO) and Selective Door Opening (SDO) modes.

Agility Trains signed a contract with the DfT to build, finance and maintain 596 train carriages – 369 for the Great Western Main Line and 227 for the East Coast Line. The £4.5bn ($7.2bn) contract was signed in July 2012. The carriages will be built at Hitachi’s factory in Kasado, Japan.

The DfT signed another contract with Hitachi Rail in July 2013 for 270 additional carriages (30 nine-car electric trains) for the East Coast Main Line. The £1.2bn ($1.9bn) contract includes the design, build, finance and maintenance of Super Express trains for the next 27.5 years. The trains will be manufactured at Newton Aycliffe, County Durham.

MTU Friedrichshafen, a subsidiary of Tognum, will provide 250-700kW MTU Powerpacks with Series 1600 rail engines for the trains. MTU will also provide maintenance services for the trains under the €200m ($272.56m) contract awarded in September 2012.

Passenger Information and Seat Reservation Systems will be supplied by Televic Rail. The systems will be based on Televic’s latest iCoM technologies. Nomad Digital will provide on-board servers (OBS) for 92 trains.

TOC antennas for the trains will be provided by H&S, driver safety devices by Arrowale, GSM-R signalling systems by Siemens, coupler and gangway by Deliner, exterior lighting by BMAC, wheelset by Lucchini, and TPWS/AWS and APC- Receiver by Thales.

Track circuit actuator will be provided by Unipart, fuel tank by Johnson Security, exhaust system by TBC eminox, side windows by TBC Romag and pantograph by Breckneil Willis.

Paddington Station, also known as London Paddington, is a central railway terminus and an underground station complex situated in the Paddington area of the west end of central London, UK.