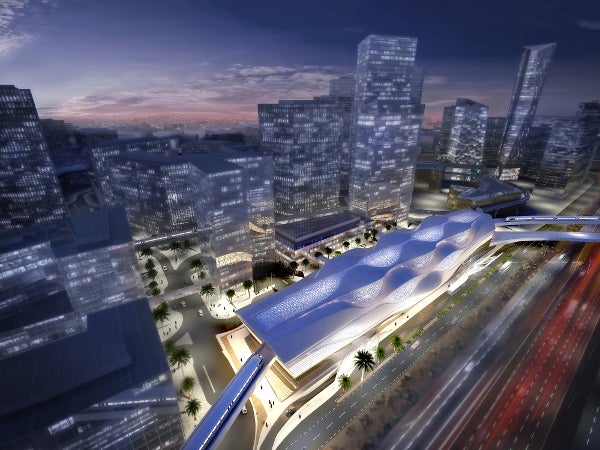 The KAFD metro station is expected to be completed by 2017, following which it will become a key interchange between the Line 1 of the Riyadh Metro and the terminus of Line 4 and Line 6 of the metro network.

The 20,434m² metro station will feature six platforms over four public floors and two levels of underground car parking, while passengers can also access the local monorail from the station through a skybridge.

According to Zaha Hadid, the new station will be combined within the urban context of the financial district, responding to the functional requirements for a multimodal transport centre and the district’s future vision.

The station will also be connected to the surrounding district by pathways, skybridges and metro lines.

Riyadh Governor Khaled bin Bander said that the project is progressing to plan and the ArRiyadh Development Authority has released details of the city’s public transport plan, including the six metro lines that will serve as the backbone for public transport in the city.

"The KAFD metro station is expected to be completed by 2017, following which it will become a key interchange between the Line 1 of the Riyadh Metro and the terminus of Line 4 and Line 6 of the metro network."

Zaha Hadid Architects beat out competition from other shortlisted bidders including Henning Larsen Architects and HOK.

Other stations on the rail network will be designed by Norwegian architectural firm Snøhetta and German-based Gerber Architekten.

The new Riyadh Metro will have six metro lines including the 44km-long Blue line that will serve the Olaya-Batha-Hayer axis and will include 39 stations, the 22km-long Green line, which will include 14 stations and move along King Abdullah road, connecting KSU in the west to King Fahad Stadum in the east.

The 45km Red line will be built along Madinah, with the old train station in the middle of the line and the Orange line will connect King Khaled International Airport to the new King Abdullah Financial District, with stations at Princess Norah University and Imam Mohammed bin Saud Islamic University.

The metro’s 26km Yellow line will be built along King Abdulaziz Road with 26 stations, while the Purple line will server eastern Riyadh and will include nine stations.