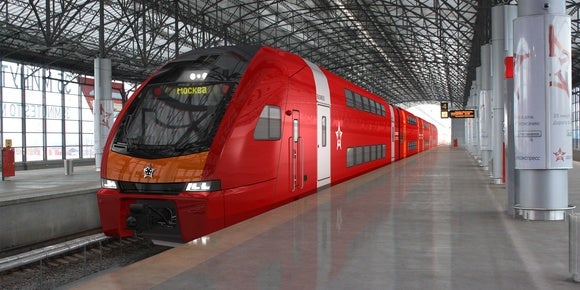 The order includes 16 four-car and eight six-car units based on Stadler ‘s KISS family, along with an option for 13 additional trains.

Delivery is expected to start in 2015 and is scheduled to be completed by the end of 2016.

The new trains will be manufactured partly at Stadler ‘s Switzerland facility and its currently-under-construction factory in Minsk, Belarus, which is expected to start service in autumn 2013.

According to Aeroexpress , the first of the new trains is expected to enter service on routes to Moscow’s airports by 2015.

Aeroexpress CEO Alexey Krivoruchko said that the new double-deck trains will increase the rail operator’s carrying capacity by 30% to 40%.

"It is only possible to resolve the problem of freight capacity shortage, connected with the constant growth of Aeroexpress trains’ popularity and infrastructure-related limitations, by implementing a non-standard increase in terms of rolling stocks’ spaciousness," Krivoruchko said.

The new 1,520mm-gauge trains will be capable of travelling at a top speed of 160km/h and will be taller and wider compared to the current 1,435mm Stadler KISS units for standard gauge operators.