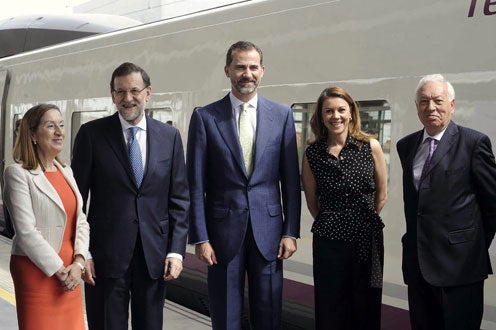 Renfe is using Alstom’s 100-series and Talgo-Bombardier’s 112-series high-speed trains to operate the AVE services, which will connect Alicante and Madrid with stations in Cuenca, Albacete and Villena.

The rail link, which is a major component of the future high-speed railway connections between central Spain and the south-east of the Iberian Peninsula, is expected to reduce journey times between Madrid and Alicante by 50 minutes to 2h 20m.

The journey time on the route is expected to be further reduced when the European Railway Traffic Management System (ERTMS) Level 2 that is being tested on the line is rolled out.

The introduction of ERTMS Level 2 will help to increase speeds on the system to 300kmph on the sections where top speeds are possible based on the infrastructure and rolling stock.

"Spanish rail operator Renfe has started commercial operations on the line with nine Alta Velocidad Española (AVE) services per day in each direction."

The installation of signalling and telecommunications systems on the line was carried out by an Alstom-led consortium under a €280m private-public partnership (PPP) contract awarded by Spanish railway infrastructure manager Adif in 2011, which also includes 20 years of maintenance.

Under the project, Alstom was responsible for undertaking the global coordination of the project, the system architecture and the supply, installation and maintenance of the signalling system and ERTMS.

Alstom was also responsible for the supply and installation of two 2×25 kV traction substations and the associated autotransformer stations.

The European Investment Bank (EIB) has co-financed the construction of the Albacete-Alicante high-speed line with a total of €231.8m.

The Spanish government said it has added 300km to the high-speed railway network in last 18 months, expanding the total high speed rail network in the country to 3,100km.

Image: Spanish Prime Minister Mariano Rajoy accompanies the Prince of Asturias Felipe at the inaugural ceremony of the new high-speed railway link between Albacete, Villena and Alicante. Photo: courtesy of the Government of Spain.