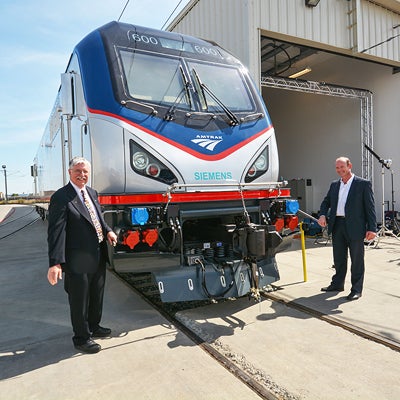 Siemens has rolled out the first of 70 advanced technology electric locomotives from its California assembly line to be used by US rail operator Amtrak for its Northeast intercity rail passenger service.

The first locomotives from the $466m order will be field tested in summer 2013 with revenue service scheduled to commence in the fall of this year.

Amtrak president and CEO Joseph Boardman said that the new locomotives will help power the economic future of the northeast region, offer more reliable and efficient service for passengers and support the rebirth of rail manufacturing in the US.

"Built on the west coast for service in the northeast with suppliers from many states, businesses and workers from across the country are helping to modernise the locomotive fleet of America’s Railroad," Boardman said.

Assembly of the new Amtrak Cities Sprinter (ACS-64) is being carried out at Siemens’ existing unit in Sacramento, California, while parts are being built at its plants in Norwood in Ohio, Alpharetta in Georgia and Richland, Mississippi.

"The first locomotives from the $466m order will be field tested in summer 2013 with revenue service scheduled to commence in the fall of this year."

Additionally, all long-distance trains operating on the NEC will be powered by the new locomotives.

Designed for easier maintenance, the new locomotives will enhance energy efficiency by using a regenerative braking system that will feed energy back into the power grid.

The new locomotives will also meet the latest Federal Railroad Administration requirements and improve mobility for the people, businesses and economy of the entire northeast region.

Testing will be carried out on the first three locomotives in summer 2013, including two at a US Department of Transportation facility in Pueblo, Colorado, and one on the NEC.

Following the testing, production of the remaining locos will be carried out for monthly delivery through 2016.

Image: Amtrak president and CEO Joseph Boardman and Siemens Rail Systems Division in the US president Michael Cahill with one of the new advanced technology locomotives. Photo: courtesy of Siemens.

The Military Radar Market in Germany to 2024: Market Brief

The Military Radar Market in Germany to 2025: Market Brief

The Police Modernization Market in the United States to 2025: Market Brief

The Soldier Modernization Market in the United Kingdom to 2025: Market Brief