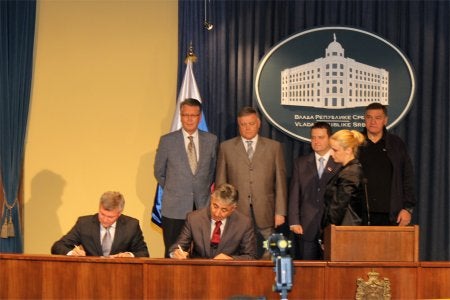 Russian Railways International has signed a contract with Serbian Railways to carry out the reconstruction of its railway infrastructure and deliver new diesel trains.

The contract is part of an agreement signed in January 2013 between Serbia and Russia, after Russia approved an $800m export loan to Serbia.

Russian Railways president Vladimir Yakunin said: "Strengthening bilateral and mutually beneficial cooperation with the railways of Serbia as part of the overall revitalisation of economic cooperation between Russia and Serbia, with a state export credit provided by the Russian Federation, is a priority for us, not only at the moment, but also over the long term."

Work under the contract will include modernisation and electrification of 16km of second track on the Belgrade – Pancevo line and the reconstruction of six sections comprising 112km on the Pan-European Corridor X.

Expected to cost about €50m, the project also involves infrastructure improvements at stations, the construction of bridges over the Tamiš river, construction of two stations, two station platforms, five new bridges, one passing point, a freight substation at Pancevo and marshalling yard at Krnjaca.

"The contract is part of an agreement signed in January 2013 between Serbia and Russia, after Russia approved an $800m export loan to Serbia."

Both sides are expected to sign an additional contract in the second half of June 2013, while work is expected to commence in September 2013 and take around five years to complete.

The scope of work also involves the reconstruction of the current and construction of a second new track on a 44km railway section between Stara Pazova and Novi Sad.

The project will also see the reconstruction of the Serbian section of the Belgrade – Bar line with a total length of 200km and the acquisition of 26 new diesel trains manufactured by Metrovagonmash OJSC (Russia).

Serbia will contribute an additional 15% to the $800m loan, making the total available fund for railway modernisation more than $900m.

Out of the total fund, around $100m will be used to buy diesel trains and the remaining will be used for rail infrastructure modernisation.

The Police Modernization Market in Russia to 2025: Market Brief

The Armored and Counter IED Vehicles Market in Russia to 2024: Market Brief

The Armored Vehicles and MRO Market in Russia to 2025: Market Brief

The Body Armor and Personal Protection Market in Russia to 2024: Market Brief

The Government Biometric Systems Market in Russia to 2025: Market Brief