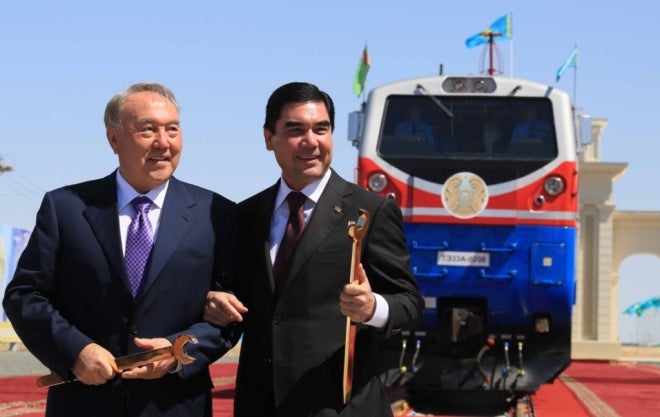 A new direct rail link has been opened up between Kazakhstan’s Bolashak transition station and Serhetyaka station in Turkmenistan.

Presidents of both nations have inaugurated the new section called Bolashak-Serhetyaka division, which will be used for direct transportation of goods through the shortest path, to cut down the transit of trains to Turkmenistan via Kazakhstan and back.

The new KZT65bn ($430m) line is a part of the future transnational rail corridor that will link Kazakhstan, Turkmenistan and Iran, in addition to offering access of land freight to sea routes in the Persian Gulf region.

According to the current agreements between the three countries, the interstate project is in the final stages of implementation.

"The new KZT65bn ($430m) line is a part of the future transnational rail corridor that will link Kazakhstan, Turkmenistan and Iran."

The new rail line, which will be used to carry grain, oil and oil products, is expected to increase the transit potential of Kazakhstan and opens a way for domestic products to new markets.

Kazakhstan content of the corridor, the 146km Uzen-Bolashak site, was implemented by JSC ‘NC ‘KTZ’ with cooperation of domestic contractors and also occupies 80% of the new overall section.

Fiber optic was used on the site Mangyshlak – Uzen – Bolashak and an uninterrupted electric supply was provided at all stations and sidings.

Future of the Kazakh Defense Industry - Market Attractiveness, Competitive Landscape and Forecasts to 2023

Future of the Uzbek Defense Industry – Market Attractiveness, Competitive Landscape and Forecasts to 2021

View All
View All
News