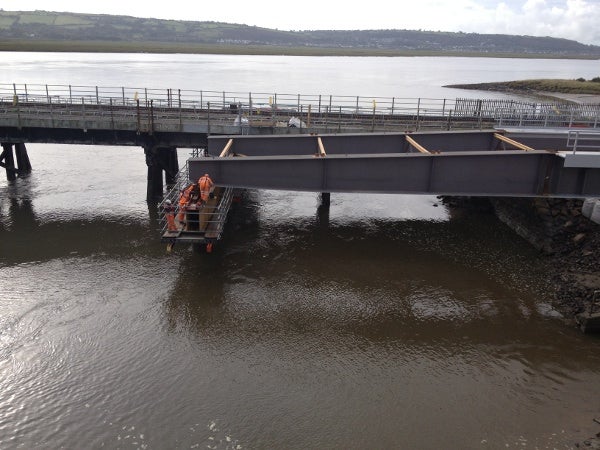 Network Rail has issued an update on its £48m project to replace Loughor Viaduct and upgrade rail infrastructure between Swansea and Gowerton in the UK.

The Loughor Viaduct Project will replace the existing 220m timber trestle viaduct that carries the South Wales Mainline between Swansea and Llanelli.

As part of the project, 80m of decking has been launched into the estuary on temporary concrete support beams, while the first section of the new bridge deck will be moved after creation of a new base to support it.

The project will help meet the expected 20% rise in passengers using the West Wales railway by 2020; the project involves the doubling of six miles of track between Cockett West and Duffryn West and the re-opening of the eastbound platform at Gowerton Station.

View All
"The Loughor Viaduct Project will replace the existing 220m timber trestle viaduct that carries the South Wales Mainline between Swansea and Llanelli."

The Loughor Viaduct project started in June 2011 and enables the £28m Gowerton Redoubling scheme to move forward, doubling the line between Swansea and Gowerton, as well as building a second track across the viaduct.

Network Rail route managing director Mark Langman said: "Following installation of the support beams, we are now beginning to slot the bridge decking into place and we are still on track for completion next Easter."

Built in 1852, the original structure of the Loughor Viaduct has links to Brunel and in 1998 it was awarded Grade II listed status.

Works also include the strengthening of six structures, alterations to a level crossing, complete re-signalling of the section, the re-commissioning of a second platform and installation of a Disability Discrimination Act-compliant footbridge at Gowerton Station.

Image: The replacement of the Loughor Viaduct will help the £28m Gowerton Redoubling scheme to redouble the line between Swansea and Gowerton. Photo: courtesy of Network Rail.