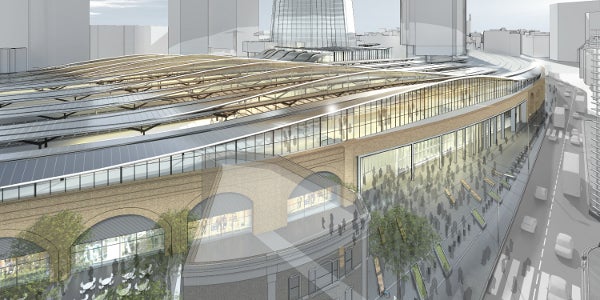 Network Rail has received formal planning consent for the £500m redevelopment of London Bridge station in the UK.

Work on the project is expected to start this summer and be completed in nine phases by 2018. The development will allow 90 million passengers to pass through the station every year, increasing passenger capacity by 35 million.

Network Rail chief executive David Higgins said the work will see the transformation of one of London’s oldest and highly congested railway terminus.

"The London Bridge project is a critical part of the £6bn Thameslink Programme," David Higgins said.

"It is only by remodelling London Bridge station that we can allow the new fleet of 12-car trains to operate at a metro-frequency on the Thameslink route."

Part of the second phase of the Thameslink programme, the project also involves laying 46 miles of new track in the 4.3 mile approach to the station.

The final station layout will have two platforms for Thameslink services that will enable 18 trains to operate every hour through London Bridge, as well as six further trains through Elephant and Castle to form 24 trains an hour that travel through central London.

Further work will also be undertaken to remove critical railway bottlenecks as part of the redevelopment. New street-level entrances and a permanent 24-hour pedestrian walkway through Stainer Street will offer better pedestrian connectivity between Tooley Street and St Thomas Street.

The first phase of the Thameslink programme will be completed during the Olympics this summer. This will allow longer 12-car trains to operate across the Thameslink route and will involve development of both Farringdon and Blackfriars stations.

Image: The London Bridge station redevelopment will be carried out in nine phases starting from this summer to 2018 increasing passenger capacity by 35 million to over 90 million. Photo courtesty of Network Rail.