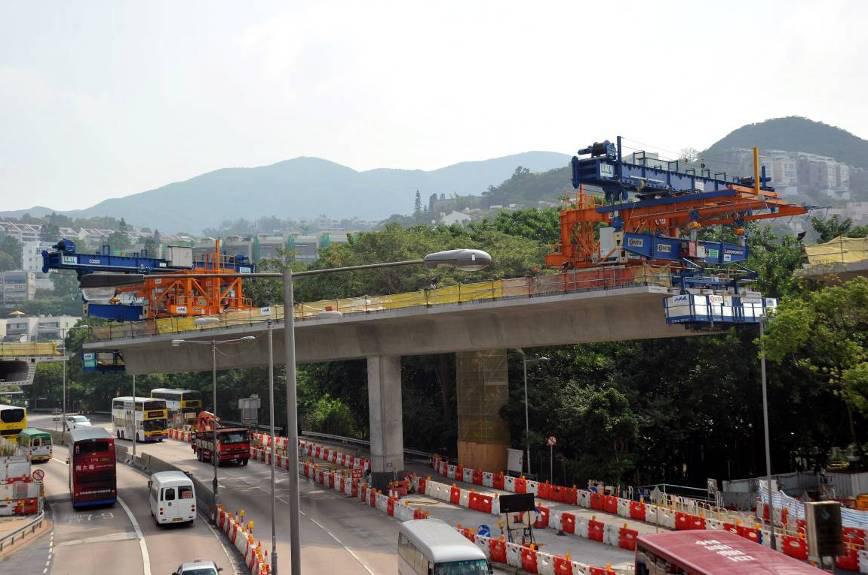 The new method is intended to cut down construction time with reduced impact to the surrounding community and environment.

Traditional equipment takes one to two months to set up and requires significant road closures, while the new equipment takes about two weeks to establish without any closures.

Instead of the conventional method of building bridge decks by casting the concrete on-site, with the new method the viaduct deck sections are pre-cast and fitted later through advanced beam-and-winch equipment.

South Island Line lead project manager Mark Cuzner said: "With the beam-and-winch equipment, not only do we complete the South Island Line (East) project faster, the residents can also enjoy the convenience of a rail service sooner."

"The new method is intended to cut down construction time with reduced impact to the surrounding community and environment."

According to MTR, the precast concrete viaduct deck sections require 628 segments. Construction of the eastern section of the South Island Line started in May 2011 and is scheduled to be completed in 2015.

So far, MTR has completed about 35% of the civil works, including 50% of the viaduct section and 45% of the tunnel excavation as part of the railway project.

The 7km medium-capacity railway line will connect the southern part of Hong Kong Island to the existing MTR network and it will be operated with three-car trains.

A 5km stretch is being built underground, while the remaining 2km route will operate on the viaduct.

Trains on the viaduct will run from the Aberdeen Tunnel toll plaza to Ap Lei Chau, passing through the Ocean Park and Wong Chuk Hang stations.

View All
View All
News