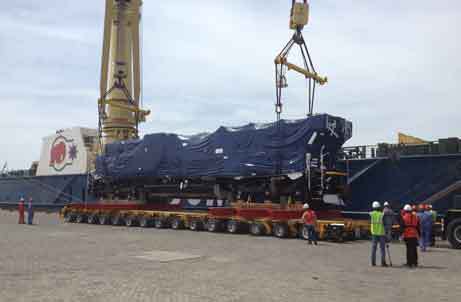 Etihad Rail, which is developing a new 1,200km, $11bn rail network in the UAE, has received the first two of seven locomotives from US-based Electro-Motive Diesel (EMD) under an order signed in August 2011.

Designed to operate in the climate conditions of the region, the new SD70ACS locomotives will be moved to Etihad Rail’s site at Mirfa in Abu Dhabi’s Western Region ahead of the launch of the first phase of the rail network later in 2013.

The heavy freight locomotives will be used to transport granulated sulphur on the 264km first phase of the line, linking Shah and Habshan to the port of Ruwais.

Etihad Rail CEO Dr Nasser Al Mansoori said: "The project is progressing on schedule and we are on track to see the first train run between Habshan and Ruwais by the end of this year."

Construction of the 1,200km rail network is being carried out in three phases; following completion it will be used for both freight and passenger transport.

The 628km second stage of the rail project will connect Mussafah Port to Khalifa Port and Jebel Ali Port. Stage three of the line will span 279km and will connect the rest of the Northern Emirates.

"The heavy freight locomotives will be used to transport granulated sulphur on the 264km first phase of the line, linking Shah and Habshan to the port of Ruwais."

The UAE rail network will form part of the GCC Railway Network, linking the UAE to Saudi Arabia via Ghweifat in the west and Oman through Al Ain in the east.

Etihad Rail secured a loan of $1.28bn in February 2013 for the construction of the first phase of the national railway network.

Etihad Rail has already awarded a civil and track works contract to a consortium comprising Italy’s Saipem, Tecnimont and UAE-based Dodsal Engineering and Construction, while a project management contract has been awarded to a Parsons-Aecom JV.

Image: The new EMD locomotives will be operated on the 264km first phase of the line, transporting granulated sulphur from Shah and Habshan to the port of Ruwais. Photo: Etihad Rail