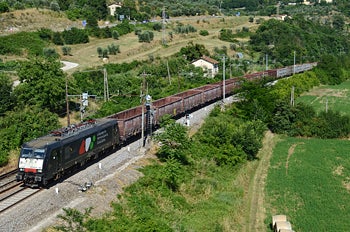 DynoTRAIN researchers are approaching completion on a four-year project to allow rail vehicles to be certifed virtually before they are commissioned.

The project, which was carried out with an overall budget of €5.5m provided by the European Commission under the 7th Framework Programme, would allow rail manufacturers to test trains virtually, ensuring safety standards throughout Europe, while offering substantial savings on rail development costs.

The project brought together manufacturers and rail infrastructure organisations in seven European countries, including the Institute for Railway Research (IRR) at the University of Huddersfield.

IRR head of research Dr Yann Bezin said that the overall aim of DynoTRAIN is to speed up the process of certifying rail vehicles so that they can run safely on tracks throughout Europe.

"If you build a fleet of vehicles to sell, the cost of a full train would be spent on certification," Bezin said. "That is quite a large proportion, because you don’t sell hundreds of trains."

"The overall aim of DynoTRAIN is to speed up the process of certifying rail vehicles so that they can run safely on tracks throughout Europe."

Under DynoTRAIN’s plan, rail manufacturers will use virtual test tracks to adjust their vehicles according to the conditions in which they would be deployed, so the system would depend on a huge database of information regarding real tracks and railway systems.

The project aims to assist in the establishment of virtual testing as a valid route to certification.

IRR has been responsible for the development of modelling software that would simulate the dynamic behaviour of railway vehicles, allowing the accurate estimation of safe operation of a train in varying conditions.

The project involved assembling a special train and operating it in Germany, France, Italy and Switzerland, while capturing the characteristics of various tracks, including high-speed lines and slower local services.

Image: Rail manufacturers would use virtual test tracks to adjust their vehicles for the conditions in which they would be deployed. Photo: courtesy of the University of Huddersfield.