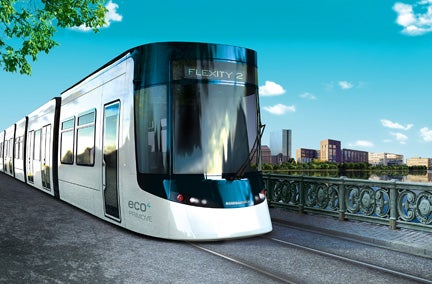 CSR Nanjing Puzhen Rolling Stock (CSR Puzhen), a partner of Bombardier, has secured a contract from the city of Suzhou in China to supply 18 low-floor trams.

CSR Puzhen, a subsidiary of the China South Locomotive and Rolling Stock Corporation, will manufacture the new light rail vehicles at its plant in Nanjing, China.

Suzhou New District Tram Co. (SND) will run the new trams, which will be based on Bombardier’s Flexity 2 design, in the high-tech Suzhou industrial development zone.

The order is the first won by CSR Puzhen following the signing of a ten-year licensing agreement with Bombardier in July 2012 to sell and manufacture low-floor trams based on Bombardier technology in China, including Hong Kong and Macao.

View All
"CSR Puzhen will manufacture the new light rail vehicles at its plant in Nanjing, China."

The new five-section bidirectional low-floor trams will be 32m long and 2,650mm wide, and will be operated on the first line of the new Suzhou light rail network, which will eventually feature six lines.

The Flexity 2 trams are equipped with energy saving technologies from the ECO4 portfolio including the Bombardier Mitrac Energy Saver, enabling energy to be reused as well as offering energy savings of about 30%.

Image: SND will operate the new trams, based on Bombardier’s Flexity 2 design, on the 18km first line of the new Suzhou light rail network. Photo: courtesy of Bombardier.