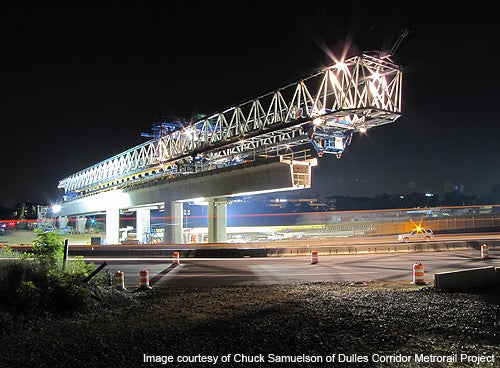 The Metropolitan Washington Airports Authority (MWAA) in the US has selected the Capital Rail Constructors joint venture for the second phase design and construction of the $1.2bn Dulles Corridor Metrorail Project.

Capital Rail Constructors, a joint venture of Clark Construction Group and Kiewit Infrastructure South, with Parsons acting as the lead designer, will be responsible for carrying out the second phase of the Metrorail project, also known as the Silver Line.

The design-build contract is the first of three packages that will complete the second phase of the project.

Under the second phase, Capital Rail Constructors will be responsible for construction of 11.4 miles of rail line, as well as six new stations at Reston Town Center, Herndon, Innovation Center, Dulles Airport, Route 606 and Route 772, starting from summer 2013.

When complete in mid-2018, phase two will provide a rail service between Washington DC and Washington Dulles International Airport, in addition to extending the existing line from Wiehle Avenue in Reston to Airport and Ashburn.

MWAA is currently undertaking the Silver Line Project in partnership with Fairfax, Loudoun counties and the Commonwealth of Virginia, following completion, the ownership will be transferred to the Washington Metropolitan Transit Authority.

Bechtel is carrying out the first phase of the Metrorail Project, which includes construction of 11.7 miles of track and five stations.

The project also includes a six-mile elevated track that will carry Metrorail trains at heights up to 65ft above the Capital Beltway and over Tysons Corner.

First phase construction of the project is nearly 90% complete and is scheduled to be opened at the end of 2013.

Image: First phase construction of the Dulles Corridor Metrorail Project is nearly 90% complete and will opened at the end of 2013.