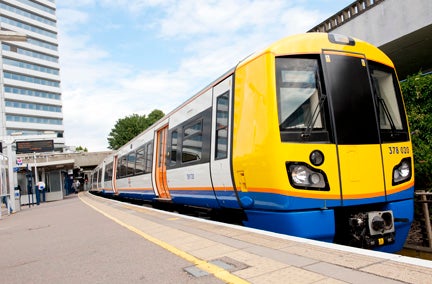 Bombardier Transportation has secured a $137m order from Transport for London (TfL) to deliver 57 additional rail cars to be operated on the London Overground network.

The new Electrostar Class 378 rail cars have been ordered as an option of an earlier order, and it will allow TfL to operate longer trains and increase passenger capacity on the London Overground network by 25%.

Delivery of the new trains will allow TfL to extend the existing Class 378 electric trains from four to five carriages across the network, although TfL will continue to operate four-carriage trains on the Gospel Oak to Barking route, where trains are diesel-powered.

The new cars are being ordered as a part of the £320m Capacity Improvement Programme as the population in London is expected to reach nine million by 2018.

The new trains will be manufactured at Bombardier’s Derby facility, with delivery scheduled to start in late 2014 and expected to be completed in 2015.

Designed especially for suburban operations, the new trains will be capable of travelling at speeds of up to 120kmph and will be supported under an existing maintenance contract.

"The new cars are being ordered as a part of the £320m Capacity Improvement Programme as the population in London is expected to reach nine million by 2018."

TfL London Rail acting director Jonathan Fox said that the new longer trains will initially be introduced on the East London Line from the end of 2014.

"With this order, the London Overground Capacity Improvement Programme is firmly underway to meet the demands of increasing numbers travelling on our network," Fox said.

"In 2012/13, the network carried nearly 125 million passengers, nearly four times the number carried when we launched in 2007," Fox added.

"To enable this trend to continue and maintain our high levels for safe, reliable and frequent travel, we need to deliver more capacity by adding more carriages."

The new rail cars will be equipped with CCTV and also offer more standing room.

The Class 378 vehicles are part of the Electrostar family of electrical multiple units, which are currently in operation with other UK train operators, such as c2c, Southeastern, Stansted Express and Southern Railways.

Image: The first Bombardier Electrostar Class 378 rail car will be run on the East London Line from the end of 2014. Photo: courtesy of Bombardier.