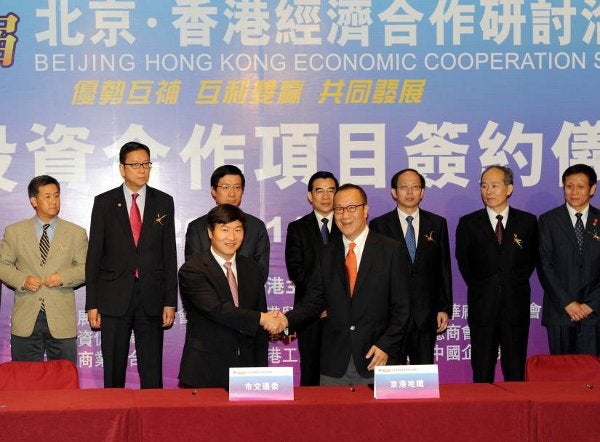 Beijing MTR and the Beijing Municipal Government have signed a concession agreement for a public-private partnership (PPP) project that covers the construction and future operation of the RMB50bn ($8bn) Beijing Metro Line 14.

Beijing MTR and the Beijing Municipal Government have signed a concession agreement for a public-private partnership (PPP) project that covers the construction and future operation of the RMB50bn ($8bn) BeijingMetro Line 14.

The 12.7km first phase, covering civil works accounting for about 70% of the project’s cost, is being undertaken by Beijing Infrastructure Investment in 2010.

Beijing MTR will be responsible for the second phase of the project, which covers electrical and mechanical systems, rolling stock and operation and maintenance for 30 years.

Beijing MTR is expected to invest RMB15bn ($2.4bn) or 30% of the total cost of the second phase and will receive an equity contribution of RMB2.2bn ($352m) from MTR Corp.

Beijing MTR general manager Richard Wong said: "Beijing Metro Line 14 will be the backbone of public transport between the southern and eastern parts of Beijing, and it will offer great convenience to the local community when it opens."

Beijing Metro Line 14 will run from Zhangguozhuang in southern Fengtai District to Shangezhuang in the eastern Chaoyang District, via Chaoyang Park and the Wangjing central business district.

The line will include 37 stations and ten interchanges, which will allow passengers to interchange to Beijing Metro Line 4 at Beijing South Railway Station when the line starts operation.

Beijing MTR, which currently operates Beijing Metro Line 4 and Beijing Metro Daxing Line, is a joint venture comprising MTR Corp and Beijing Capital Group, which both own a 49% stake, and Beijing Infrastructure Investment, which holds the remaining 2% interest.

In March 2012, Bombardier won a contract to provide Mitrac propulsion equipment for a fleet of 63 Beijing Metro Line 14 trains.

Bombardier is responsible for providing engineering, manufacturing, testing, commissioning and maintenance, as well as initial propulsion spare parts for the new metro trains, which will be built by CNR Changchun Rail Vehicles.

Image: The concession agreement, signed by Beijing MTR and Beijing Municipal Government, covers the construction of Metro Line 14 and its operation and maintenance for the next 30 years. Photo: courtesy of MTR Corporation.