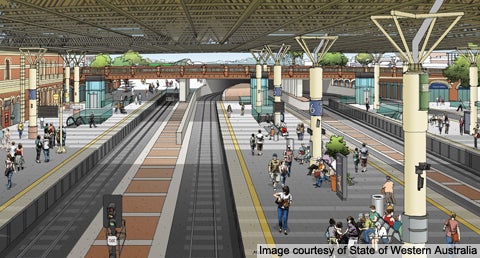 Funding will be used for the construction and overhauling of more than 4,000km of rail, with the Interstate Rail Freight Network now carrying more freight than ever before and at much faster speeds.

Australia’s Government said it also assisted in planning the Melbourne Metro, Cross River Rail in Brisbane and a light rail network for Perth. An investment of A$3bn ($2.9bn) has been allocated towards the Melbourne Metro Rail project in order to further progress planning and development work for the proposed nine kilometre rail tunnel project, which includes five new underground stations.

News
Alstom installs new aluminium welding line at Wroclaw site in Poland
Data Insights
View All
"Funding will be used for the construction and overhauling of more than 4,000km of rail."

The government has also assigned A$715m ($703m) towards construction of Brisbane’s Cross River Rail, which will run trains under the Brisbane River between Yeerongpilly and Victoria Park.

The project is expected to almost double the capacity of Brisbane’s suburban rail network, enabling it to carry more than 17,000 extra passengers during the morning peak hours.

"The budget has clearly considered the major growth required at both the public transport and chief logistics sectors and also importantly provides for Australians to be trained in the skills necessary to make this happen," Daly said.

"The Federal Government’s $715m offer towards the $4.4bn Cross River Rail project in Brisbane was a positive step forwards but would not be enough to get the important project off the ground quickly."

About A$500m ($491m) was also allocated towards a rail project in Perth, which would be either for the delivery of a light rail network within the city or for the construction of a new rail link to the city’s airport.