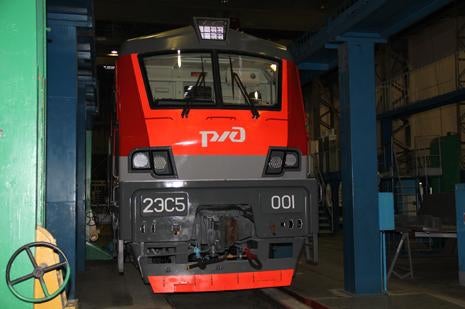 Alstom and its Russian partner Transmashholding (TMH) have entered into an agreement with Russian Railways (RZD) to jointly develop a new dual-voltage electric locomotive.

Set to be named 2ES20, the new double-section freight locomotive with asynchronous traction motors will be capable of operating on 3kV dc and 25kV ac electrification systems.

The new twin-section locomotive is set to give RZD the potential to eliminate time-consuming and inefficient locomotive changes at the boundary points between different supply networks.

"Its application is able to considerably reduce the time for goods traffic in critical sections of the rail network," Bokarev said. "We expect the introduction of dual-voltage electric locomotives in the network to significantly increase the efficiency of the railway transport."

"The new double-section freight locomotive with asynchronous traction motors will be capable of operating on 3kV dc and 25kV ac electrification systems."

Alstom Transport president Henri Poupart-Lafarge said that the project is part of RZD’s plan to modernize 20,000 locomotives by 2030.

"This new and high performing locomotive will enhance freight operations in the country, as well as in the 1520 market," Poupart-Lafarge said.

Development of the design documentation for the new 2ES20 locomotive is scheduled to be completed by September 2013, with the first prototype expected to be ready for testing in March 2014.

Engineering design of the new locomotive and its major components will be carried out by TRTrans, the engineering company jointly managed by Alstom and TMH in Moscow and Novocherkassk.

Production of the locomotives will be carried out at the Novocherkassk Electric Locomotive Plant (NEVZ), which is part of Transmashholding.

Asynchronous drives and other traction components will be produced at Alstom and TMH’s newly opened joint production site of RailComp, which is based at TMH’s NEVZ locomotive plant.