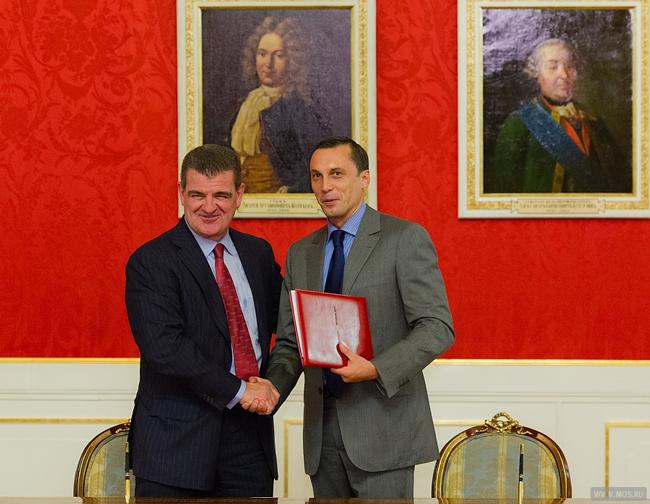 The order includes 16 four-car and nine six-car train sets based on Stadler’s KISS family, along with an option for an additional 54 train sets.

The first train is expected to enter service in 2015, while all the trains are scheduled to be delivered by May 2016.

Moscow Mayor Sergey Sobyanin said the new rolling stock has been ordered to replace the existing trains serving the routes between Moscow rail terminals and its airports due to insufficient capacity.

"Aeroexpress services, which include transporting Moscow passengers to the capital’s airports, have become one of the most popular means among other public transport modes," Sobyanin said. "The project has proven to be developing successfully; this year will result in 158 million passengers being carried by Aeroexpress trains."

"Collaboration with Stadler aims to solve one of the most essential problems faced by Aeroexpress today, which is an increase in carrying capacity," Krivoruchko said.

"The order includes 16 four-car and nine six-car train sets based on Stadler’s KISS family, along with an option for an additional 54 train sets."

"Aeroexpress passenger traffic is increasing from one year to the next by almost 20%, and introducing new double-deck trains is a logical solution, allowing us to not only significantly enlarge our trains’ seating capacity, but also provide our passengers with even greater comfort during their journey," Krivoruchko added.

The new trains will be capable of travelling at a top speed of 160km/h and will be made of light aluminium, which will cut down their weight compared to traditional railcars made of steel.

In February 2013, Stadler Rail secured a €350m order from Aeroexpress for 24 double-decker multiple-unit trains to be operated on its commuter rail routes linking Moscow’s rail terminals and its three airports.

Image: Aeroexpress’ new 25 double-decker multiple-unit trains will be delivered by May 2016. Photo courtesy of Aeroexpress.