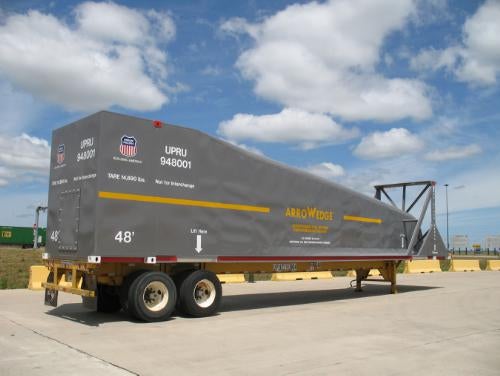 According to Union Pacific, the Arrowedge production version, which has been in development for several years, is part of its aim to design, build and implement fuel-saving technologies.

The 48ft Arrowedge is designed to be deployed on top of the first freight container of a double-stack intermodal train and has a tapered body ,which enables free air movement around the train’s top frontmost containers.

The technology reduces aerodynamic drag, decreasing the amount of locomotive power required to propel the train.

"The technology reduces aerodynamic drag, decreasing the amount of locomotive power required to propel the train."

"We are excited to see the results of this innovation in action and how it can springboard further research and development," Iden said.

Union Pacific holds two US patents for the Arrowedge, with more US and Canadian patents pending.

The company expects to install the technology on double-stack train services between Joliet, Illinois and Long Beach, California, by the end of September 2013.