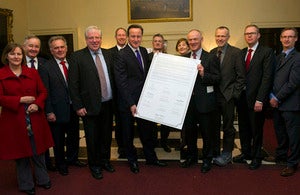 The high-speed rail preparation (paving) act has received royal assent following its passage through the UK Parliament with cross-party support, marking a major milestone in the High-Speed 2 (HS2) rail project.

With this development, the act will become law. It allows expenditure on preparatory work including construction design on phase one and phase two of HS2 as well as other phases of a high-speed rail network. It also provides compensation payments to those affected by the route.

In addition, leaders from the UK’s ten largest cities presented a declaration to the prime minister for quick delivery of HS2, and announced their support for the creation of a full high speed network.

"This is a major milestone in the HS2 project."

The ministers called for Parliament to unite and proceed with the hybrid bill for phase one and deliver plans for phase two.

The hybrid bill, which ultimately gives government the powers to construct and operate the railway, will be introduced in Parliament for its first reading on 25 November.

UK Transport Secretary Patrick McLoughlin said: "This is a major milestone in the HS2 project. The new north-south railway needs cross party backing, so I am very pleased that MPs representing constituencies across the country and peers from all three main parties have again given a clear signal of support.

"Receiving royal assent for this act, on schedule, provides the public and businesses further reassurance of our determination to drive forward and deliver HS2 as quickly as possible."

Led by Commercial Secretary Lord Deighton, the HS2 Growth Taskforce is working to maximise the potential from HS2 and will publish its final report to government in early 2014.

Image: leaders have presented a signed declaration to the prime minister calling for the fast delivery of HS2. Photo: courtesy of gov.uk.