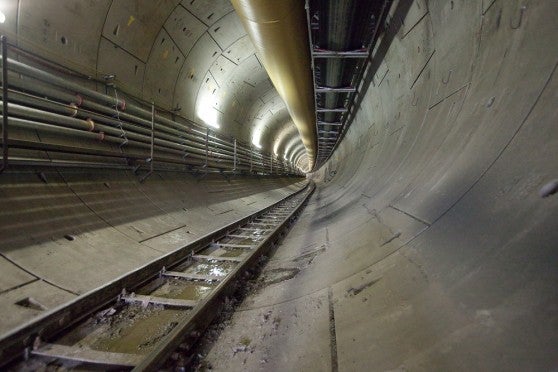 Crossrail’s second tunnel boring machine (TBM), Ada, has broken ground at Royal Oak portal in west London in the UK and started tunnelling towards Paddington after the completion of the first tunnel.

The first TBM, Phyllis, started tunnelling in May 2012 and successfully reached Paddington, having completed a 750m tunnel from Royal Oak.

"Once Ada has made sufficient progress, Phyllis will move forward through the Paddington station box onwards to Bond Street, Tottenham Court Road and then Farringdon," Sibley said.

According to the company, the tunnels between Royal Oak and Farringdon are scheduled to be completed in late 2013.

A concrete segment plant at Old Oak Common has produced around 12,000 segments, with 3,680 already used on the western tunnel.

Crossrail said it will complete major works to install a conveyor system behind the TBMs once Ada is fully underground.

A total of 24km of conveyer belt will be used to remove excavated material from the western tunnels.

Rail sidings have also been built to enable freight trains operated by GB Railfreight to access Westbourne Park to transport the excavated material to Northfleet, Kent, where it will be shipped to Wallasea Island in Essex to create an RSPB nature reserve.

"The first TBM, Phyllis, started tunnelling in May 2012 and successfully reached Paddington, having completed a 750m tunnel from Royal Oak."

So far, close to 66,000 tonnes of excavated material has been transported to Northfleet.

Site workers have also constructed 2km of 900mm narrow gauge tunnel railway from Westbourne Park to allow tunnel locomotives to transport materials and supplies in and out of the tunnel.

Eight TBMs will be used to excavate 21km of twin bore tunnels running between Royal Oak in west London and Pudding Mill Lane and Plumstead in east London.

Two TBMs, Elizabeth and Victoria, are currently being assembled at Limmo Peninsula near Canning Town station for the eastern tunnels between the Docklands and Farringdon.

Both Victoria and Elizabeth will be launched from Limmo Peninsula in late 2012, and will build the longest section of the £14.8bn project’s tunnel work, measuring 8.3km to Farringdon, via Canary Wharf, Whitechapel and Liverpool Street.

A fifth TBM, Sophia, recently completed factory testing and will start work on the 2.6km Thames Tunnel between Plumstead and North Woolwich in early 2013.