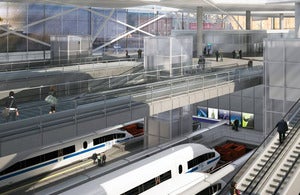 The UK Government has unveiled its plan for the second phase of the £32bn HS2 high-speed rail network, which will run northwards from Birmingham.

The planned 211-mile Y-shaped route from Birmingham will have five new stations at Manchester, Manchester Airport, Toton in the East Midlands, Sheffield and Leeds.

The preferred route of phase has been released ahead of a formal consultation later in 2013, while the final route is expected to be selected by the end of 2014.

The plans for the second phase of HS2 follow the confirmation of HS2’s 140-mile first phase between London and Birmingham.

First phase construction is scheduled to start in 2017 with the first high-speed trains in service by 2026, while the second phase is expected to begin in mid-2020 and be completed by 2032.

The UK Government has also ordered the Department for Transport to explore whether the project can be fast-tracked so that the second phase of HS2 is completed before the scheduled completion date of 2032.

UK Prime Minister David Cameron said it is vital for the UK to embrace the "high-speed revolution".

"The preferred route of phase has been released ahead of a formal consultation later in 2013, while the final route is expected to be selected by the end of 2014."

"We are in a global race and this government’s decision to make high speed rail a reality is another example of the action we taking to equip Britain to compete and thrive in that race," Cameron said.

"High-speed rail is a catalyst that will help to secure economic prosperity across Britain, rebalance our economy and support tens of thousands of jobs."

The project will see enhancements carried out at local transport connections around all high-speed stations, particularly at non-city centre locations.

Travelling at speeds of up to 250mph, HS2 will also reduce journey times from Birmingham to Leeds from two hours to 57 minutes, while phase one will cut London-Birmingham travel times from one hour and 24 minutes to 49 minutes.

Image: Construction on the second phase of HS2 is expected to begin in the mid-2020 and be completed by 2032. Photo: courtesy of Department for Transport.