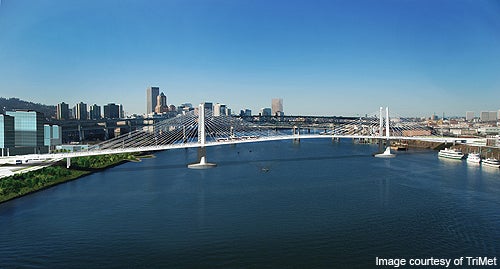 The Tri-County Metropolitan Transportation District of Oregon (TriMet) has started work on the 500m-long concrete deck of the Portland-Milwaukie light rail bridge in Oregon, US.

The new 1,800t transit bridge is being built over the Willamette River and is part of the $1.49bn light rail transit project to link Portland State University, Milwaukie and North Clackamas County.

A four-pier cable-stayed 1,720ft-long bridge, which will include two piers on land and two in the water at the towers, will measure 180ft from pier cap to top.

The bridge, which will feature two 55m-high towers connected by 3.5 miles of cable, will serve light rail trains, buses, pedestrians and cyclists.

"A four-pier cable-stayed 1,720ft-long bridge will measure 180ft from pier cap to top."

Work is in progress on the first section of the deck, known as the pier table, and the bridge’s western pylon has been completed.

MAX services on the light rail transit project are scheduled to start in 2015, which will expand the rail system to 60 miles; by 2030, around 27,000 passengers are expected to be transported daily.