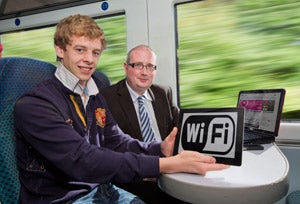 Translink has rolled out WiFi services to all trains across Northern Ireland Railways (NI Railways).

The free WiFi service on all local train services will be available for passengers across Northern Ireland from the end of October 2012 on cross-border Enterprise services.

In order to access free WiFi, passengers will require a WiFi-enabled device, such as a laptop, tablet or smartphone.

Translink general manager of Rail Services Mal McGreevy said that the new WiFi facility will allow the company to further improve its customers’ onboard travel experience.

"More and more people are using the train and making better use of their travel time to catch up on emails, engage in social media, web browsing and even planning their next trip," McGreevy said.

"All local trains across the NI Railways network are now already fully equipped and all cross-border Enterprise services will be fitted with the new technology from the end of October giving our customers free access to high-speed internet, making rail travel even more convenient, attractive and flexible."

The company said that significant proportion of their passengers will benefit from its improved services, as one in ten now own a tablet while 34% of adults now own a smartphone.

"In order to access free WiFi, passengers will require a WiFi-enabled device, such as a laptop, tablet or smartphone."

"We are encouraging as many people as possible to experience rail travel, with all our new Class 4000 trains now in passenger use the train offers great value, especially in the current climate where the costs of running a car continue to rise."

Currently, NI Railways runs a rail network across the province serving the Bangor line from Bangor to Belfast, Larne line from Larne Harbour to Belfast, the Londonderry line from Derry – Coleraine – Belfast and the Portadown line from Newry – Portadown – Belfast. In July 2012, Nomad Digital was awarded a contract by Translink NI Railways to equip the system for provision of WiFi services.

Image: Translink WiFi on NI Railways trains will be available for passengers from the end of October 2012 Photo: courtesy of Translink.