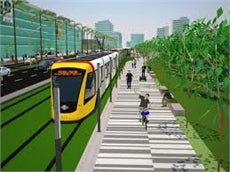 Thales has secured a contract from Trans Sistemas de Transportes, a member of the VLT RMBS consortium, to provide signalling and communications systems for the new Light Rail Transit (LRT) system in the city of Santos, Brazil.

Santos’s LRT project is designed to improve transport in the city’s metropolitan area, which has a population of around 1.5 million.

The first phase of the programme will include an 11km section connecting the port of Santos to the Barreiros terminal near São Vicente, while a second 4km section will link Conselheiro Nébias station to Valongo.

Following the opening of both sections in late 2014, the network is expected to transport 70,000 passengers a day, which would reduce the city’s bus fleet by 23%.

Thales key account manager for transport in Brazil Thomaz Aquino said that the project will bring the company’s technologies to the Brazilian market and continue to support the modernisation of the country’s infrastructure.

"Winning the contract for the Santos LRT is a source of pride for us and further consolidates Thales’s presence in Brazil," Aquino said.

In April 2013, Thales secured a contract from the Monotrilho Manaus Consortium to supply telecommunications systems for the Manaus monorail.