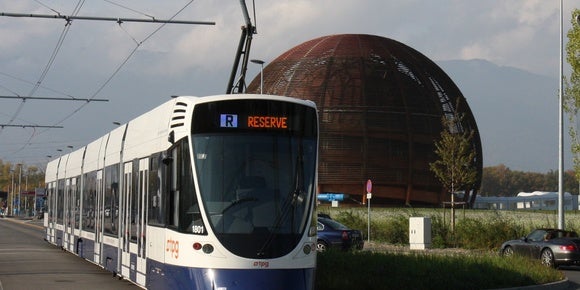 Stadler’s new supercap energy saving system allows braking energy to be stored during normal operation, which can later be reused when the vehicle starts to move.

In special cases, such as power failure, or failure of the catenary or pantograph, the vehicle will be able to travel without power.

According to Stadler, the stored energy will enable the tram to travel at least 400 metres without mains power in an emergency situation, which can be increased to over a kilometre if driven economically.

Since December 2011, the initial trams, out of a total of 32, have been in regular service for TPG. One of which is equipped with a supercapacitor energy saving system as a prototype to store braking energy in condensers that are mounted on the roof.

In the first trials, one vehicle covered a distance of 1,500m on a TPG depot circuit without power.

"The stored energy will enable the tram to travel at least 400 metres without mains power in an emergency situation, which can be increased to over a kilometre if driven economically."

The supercap units weigh close to a tonne and can store energy equal to the total kinetic energy of the empty vehicle at 55km/h.

TPG and Stadler, in cooperation with ABB, have tested the supercap prototype on the TGP network in passenger service and compared its energy consumption with that of the others, which recover braking energy and release back into the catenary.

If the tests prove positive, the other 31 series vehicles could be equipped with supercap modules.

Image: Stadler’s supercap system on the tram enables braking energy to be stored, allowing the vehicle to travel at least 400m without main power in an emergency situation. Photo: courtesy of Stadler Rail.