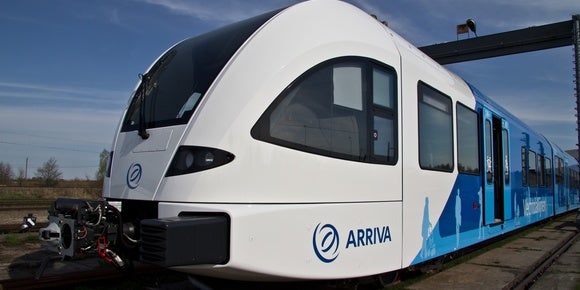 Stadler Rail has delivered its electric articulated multiple-unit train (EMU-GTW) to Arriva for operations in the Dutch provinces of Overijssel and Drenthe.

The EMU-GTW rail vehicles are based on GTW trains, which Arriva Netherland has been using on its network since 2005.

The air-conditioned trains have spacious legroom in all compartments, while 75% of the trains are low-floored and designed to provide easy access for disabled passengers.

Made of lightweight aluminium, train operators can run four trains at the same time in multiple-unit operation. Each of the carriages will be fitted with public WLAN, five TFT monitors and there will be dedicated working and quiet areas in compartments.

The delivery follows a deal signed between Stadler and Arriva Netherlands in mid-2010, for the supply of 14 EMU-GTWs for the Vechtdallijnen concession.

In June 2010, Arriva Netherlands had also ordered 38 GTW-articulated multiple-unit trains from Stadler to be deployed in the province of Gelderland, with the remaining to be used in the Dutch provinces of Overijssel and Drenthe.

The latest order brings the total number of GTW trains ordered by Arriva to be used in different parts of Netherlands to 99, since 2005.

The GTW-articulated railcars have been designed on a modular vehicle concept to cater for the demand of track gauge, structural clearance and transport capacity.

Modular design of the railcars is available in electric versions for all common voltages, as well as in the diesel-electric models.

The trains’ power modules are located in the centre of the vehicle, which accommodates the entire power plant, while the module is designed with a passageway.

Image: The trains are air-conditioned and have spacious legroom in all compartments, with 75% of the trains low-floored. Photo: courtesy of Stadler Rail.