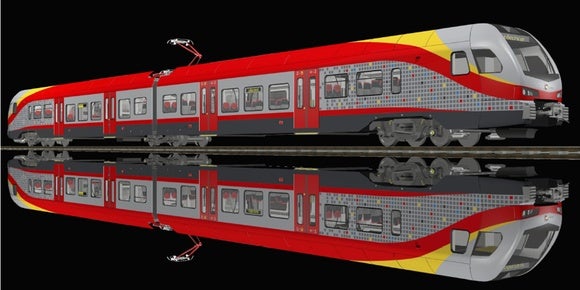 Stadler Polska, a Polish subsidiary of Stadler Rail, has won a PLN510m ($164m) contract from Lodz Agglomeration Railway (LKA) to deliver and maintain a fleet of 20 two-car Flirt EMUs.

LKA’s new Flirt trains will be manufactured at Stadler Polska’s Siedlce plant and the first six units are scheduled to be delivered by the end of April 2014.

The next batch of ten sets will be delivered by the end of October 2014, and the remaining four units are expected to be handed over to LKA at the end of February 2015.

The contract, which has been co-financed by the European Union, includes a 15-year maintenance deal that will be effective from the time the trains are delivered to LKA.

According to Stadler, the new Flirt trains will ensure low operating costs, especially in terms of energy usage.

The vehicles, which can travel at a top speed of 160kmph, will feature light aluminium alloy bodyshells and will be equipped with European Train Control System 2 (ETCS 2).

Stadler’s new generation of Flirt trains will meet travelling safety and environmental protection standards, as well as all the requirements of LKA concerning accessibility for disabled passengers.

Compared to prior versions of Flirt trains, the new vehicles will use less energy per passenger, Stadler said.

The new deal will bring the number of Flirt trains sold worldwide by Stadler Rail to 800 vehicles.

Image: Stadler will deliver the first six Flirt trains by the end of April 2014, with the rest due to be handed over by February 2015. Photo: courtesy of Stadler.